James Iredell House
In 1790, President George Washington was searching for ideal candidates to be nominated to the first U S Supreme Court. Among others, he chose a 38-year-old Edentonian by the name of James Iredell, Sr. Two days later, February 12th, the Senate confirmed Iredell who became the youngest member of the original Supreme Court. 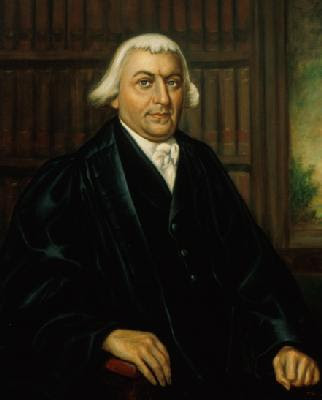 The home of James Iredell, Sr., is in Edenton and operated as a North Carolina Historic Site. Iredell did not warm to the idea of revolution easily. Yet, once convinced, he became the leading advocate for American Independence and focused a great deal on the inequities of the court systems imposed by the Crown. After the 1787 convention at Philadelphia proposed a new federal Constitution, Iredell launched a public movement in North Carolina in favor of its adoption. When George Mason of Virginia published eleven objections to the document, Iredell responded in 1788 with his “Answers,” that complemented the Federalist Papers. His “Answers” were widely circulated, not only in North Carolina but in the rest of the emerging nation, as well.
The Edenton Historical Commission works closely with the Iredell House Association and the state in restoration of dependencies related to James Iredell’s property.
Significant accomplishments at an early age were nothing new to Iredell. He moved from England to Edenton to become a customs officer at age 17 and found time to study the law under Samuel Johnston, another famous Edentonian. Even though he worked for King George, Iredell was a leading essayist advocating independence. As a Federalist, he advocated the adoption of the proposed Constitution to his fellow North Carolinians. Iredell is credited with establishing many key themes and ideas of the Declaration of Independence in a treatise he wrote, Principles of an American Whig.
Iredell contributed to the Supreme Court’s early body of thought and helped establish many points of law we continue to cherish. For example:

“[Congress] certainly [has] no authority to interfere in the establishment of any religion whatsoever…Is there any power given to Congress in matters of religion? Can they pass a single act to impair our religious liberties? If they could, it would be a just cause of alarm…If any future Congress should pass an act concerning the religion of the country, it would be an act which they are not authorized to pass, by the Constitution, and which the people would not obey. Prudence, indeed will dictate that Governments long established should not be changed for light and transient causes; and accordingly all experience hath shown, that mankind are more disposed to suffer, while evils are sufferable, than to right themselves by abolishing the forms to which they are accustomed. But when a long train of abuses and usurpations, pursuing invariably the same object evinces a design to reduce them under absolute despotism, it is their right, it is their duty, to throw off such government, and to provide new guards for their future security.”
“The power of impeachment is given by this Constitution, to bring great offenders to punishment. It is calculated to bring them to punishment for crimes which it is not easy to describe, but which every one must be convinced is a high crime and misdemeanor against the government.”
“If they were punishable for exercising their own judgment, and not that of their constituents, no man who regarded his reputation would accept the office either of a Senator or President. Whatever mistake a man may make, he ought not to be punished for it, nor his posterity rendered infamous. But if a man be a villain, and wilfully abuses his trust, he is to be held up as a public offender, and ignominiously punished.”
“A public officer ought not to act from a principle of fear. Were he punishable for want of judgment, he would be continually in dread. But when he knows that nothing but real guilt can disgrace him, he may do his duty firmly if he be an honest man, and if he be not, a just fear of disgrace, may perhaps, as to the public, have nearly the effect of an intrinsic principle of virtue.”
“According to these principles, I suppose the only instances in which the President would be liable to impeachment, would be where he had received a bribe, or had acted from some corrupt motive or other.”

According to the National Park Service’s websiteabout the Iredell House:

“Early in 1798, in a state of extreme mental anguish because of mounting debts brought on by unwise speculation in lands, James Wilson, probably while visiting North Carolina on Federal circuit court matters, took refuge in this house. It was the home of his friend and fellow U.S. Supreme Court Justice James Iredell. Within a few months, Wilson died there.”

Iredell is said to have worked closely with President George Washington and John Adams in establishing early standards of US law. For example, in the recent (1999) Supreme Court case Alden v. Maine,  the majority opinion referred to Iredell’s Chisholmopinion.