By Tom Newbern and Jim Melchor

The most often overlooked aspect of the study of early American furniture is markings used by shop masters, their apprentices, and independent journeymen, and the meanings of those markings.  People of the 18th and early 19th centuries, just as people of today, are creatures of habit.  Anyone who has engaged in woodworking on any level knows that they quickly develop their own repertoire of various techniques for measuring, marking, cutting, and assembling the elements that will hopefully successfully complete their particular project.  Then as now, marks are used to show, among other things, where a board should be cut, the true or show surface of a piece of wood, and how exactly the parts should be assembled.  In the 18th and early 19th centuries, these marks might be in chalk, graphite, red carpenter’s pencil, ink, or inscribed, incised, or chiseled into the wood surface.  Apprentices were taught the habits of the shop masters.  Over time, these traits would be modified to the taste of the individual as he rose through the ranks to become a journeyman cabinetmaker or a shop master.  Journeymen often traveled from shop to shop looking for profitable employment.  While they might have assimilated certain marking and construction techniques from later shops, they often continued to employ aspect of the habits they learned during their apprenticeships.

As we have shown in WH Cabinetmaker, A Southern Mystery Solved, distinctive marks often were also used to identify the maker of a particular element of a piece of furniture or structure.  Journeymen were independent craftsmen employed by the shop master.  They often used their initials, their full name or last name, or a symbol or mark familiar to all in the shop, to signify their work product so as to ensure proper compensation by their employer.  Apprentices, on the other hand, were not independent craftsmen.  Their work product was the property of the shop master and therefore not subject to separate compensation.  Apprentices often used the name or initials of the shop master to signify their work.  The shop master also wrote his name or initials to signify his work product.

A recent reexamination of a chest of drawers has brought to light an example of an early 19th century Norfolk, Virginia craftsman who used his initials as construction notations rather than to identify his work product, although the initials would have served both purposes.  The chest was purchased a number of years ago from a family that had historically lived near Williamsburg, Virginia.  The use of yellow pine and poplar as secondary woods indicates its southern origin.  However, an examination of its construction pinpoints Norfolk as its place of manufacture.

From the 1790’s through the 1810’s, a number of elaborate chest of drawers were constructed in Norfolk featuring bowed fronts, extensive though conservative inlay, and splayed straight feet set flush with the case front and sides, known as French feet.  These chests often displayed front skirts comprised of a spur-ogee-spur emitting from each foot, meeting in the middle of the skirt in a small cove.  The chests’ side skirts were usually a simple bow or swell in profile. 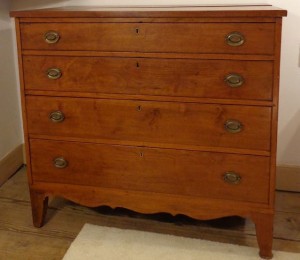 The chest found near Williamsburg has a straight front and represents a less expensive option available from Norfolk craftsmen (Fig. 1, Norfolk chest).  The chest lacks the usual inlay found on Norfolk chests of this period, although a simple band is found at the bottom of the case.  Its front skirt is an adaptation of the standard Norfolk skirt described above (Fig. 2, Front skirt of Fig. 1).  The same elements lead from the chest’s front feet to the center of the skirt.  Here, however, the inner spurs frame a large, bowed center element, rather than a small cove. 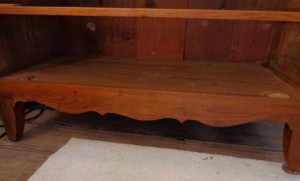 The construction of this chest matches standard Norfolk construction of the period.  While some elaborate Norfolk chests feature dustboards dadoed into the drawer blades and case sides, a number feature drawers simply supported by drawer blades and drawer runners dadoed into the case sides.  This chest contains the second, simplified drawer support system (Fig. 3, Drawer supports of Fig. 1).  The chest’s case top is supported along its front and back edges by thin, wide horizontal rails and along its side edges by closely set glue blocks which are mitered to the front and back rails at the corners (Fig. 4, Top supports of Fig. 1).  This top support system is in turn supported by lateral battens mortised into the upper case sides.  These lateral battens were standard fair for Norfolk case work of the 1790’s, and the combination of lateral battens with closely set glue blocks and rails is found on an early classical sideboard made in Chester Sully’s cabinet shop in the 1810’s (See Classical Norfolk Furniture …, Figs. 5-36 and 5-38). 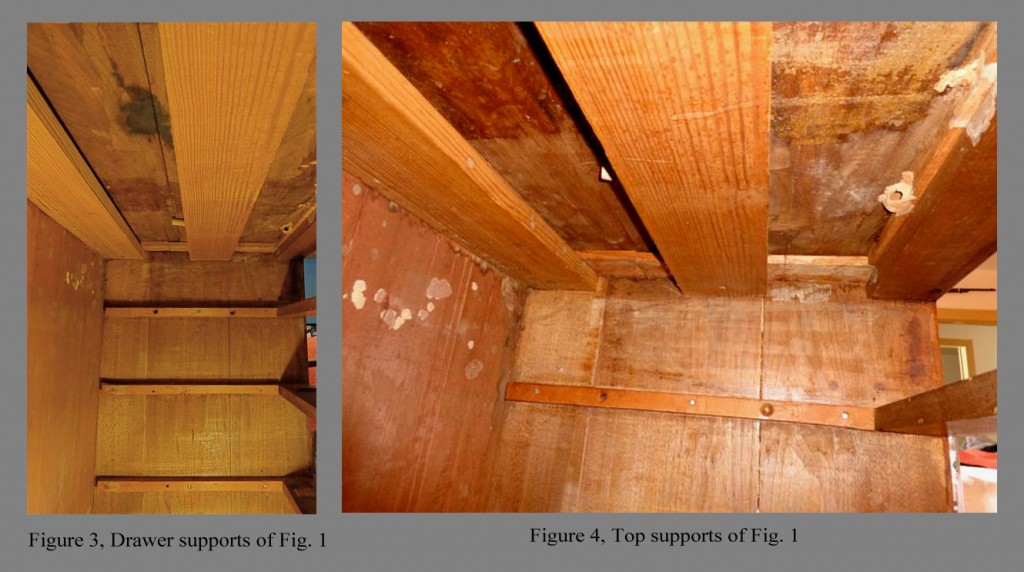 The bottom of the chest’s case likewise displays typical Norfolk construction features of the late 18th and early 19th centuries.  It rests on rails that run along the case front and sides, and partially along each end of the case back (Fig. 5, Bottom of Fig. 1).  These rails are mitered in the front corners.  Spaced blocks are set under the front and side rails to support the case’s shaped front skirt and bowed side skirts.  Shaped vertical blocks back the chest’s feet (Fig. 6, Foot support of Fig. 1).

Norfolk craftsmen of the last half of the 18th century often followed urban British construction techniques and backed their chests with raised panels set in rails and stiles.  This allowed the case back to expand and contract with temperature and humidity fluctuations without splitting and was well suited for the area’s variable climate. Later Norfolk chests, including this example, employed a simplified version of the raised paneled backs.  The back of this chest is composed of two flat panels dadoed into the rear of the case sides and rabbeted into a wide central stile.  All three boards are flush nailed to the rear lateral batten at the case top and to the back of the case bottom (Fig. 7, Back of Fig. 1).  However, this abbreviated type of back construction negates the benefits of a conventional raised-panel frame assembly as can be seen here in minor shrinkage splitting around the nails and a major, full-length split in one back board.  This simplified back construction, plus the use of early cut nails with applied wrought heads rather than wrought nails, and decorative elements found on the chest, help date it to the first decade of the 19th century. 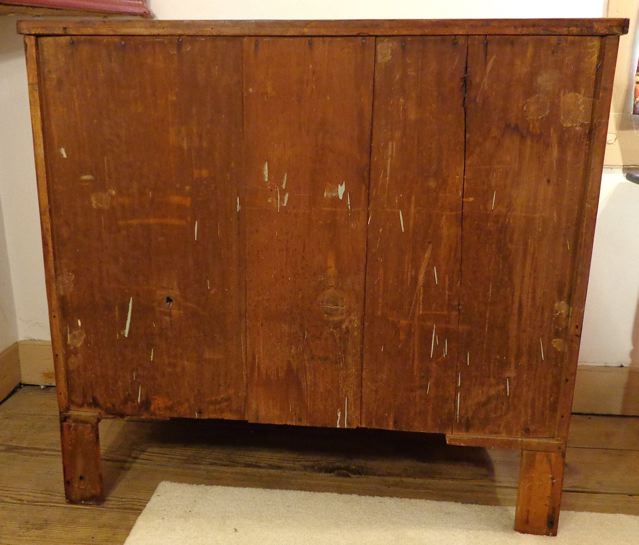 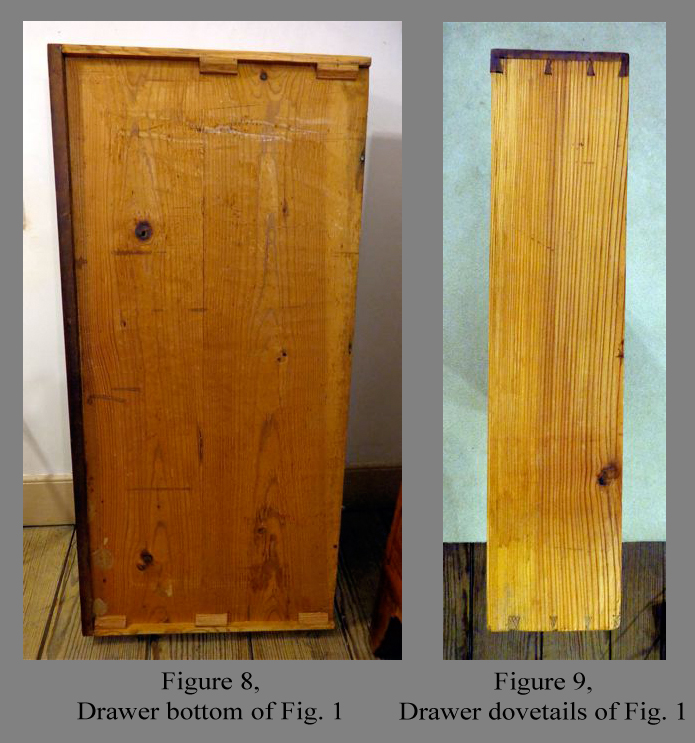 While the chest’s construction shows it to be a Norfolk product, the newly discovered markings point to its particular shop of origin.  They are found on the lower interior surface of each case side.  The markings on the proper left side are well preserved.  Those on the proper right side have been well worn by the opening and closing of the lower case drawer, although enough remains to verify that both marks are identical.  Their placement identifies the lower portion of the case sides for assembly purposes.  Any simple mark would have served the purpose, but this maker chose to use what are undoubtedly his own initials.  Written on each interior side are the inverted initials, “CS”, (Fig. 10, Initials as they appear on interior side of Fig. 1) (Fig. 11, Initials on interior side of Fig. 1, inverted for proper orientation to read)(The upper portion of this figure is the signature as it appears in situ on the chest side, while the lower portion of this figure is the same signature enhanced for better recognition).  The obvious candidate to have placed these initials on a Norfolk chest of the first decade of the 19th century is Chester Sully.  This attribution is strengthened by the previously discussed matching construction of the top assembly of both this chest and Sully’s classical sideboard. 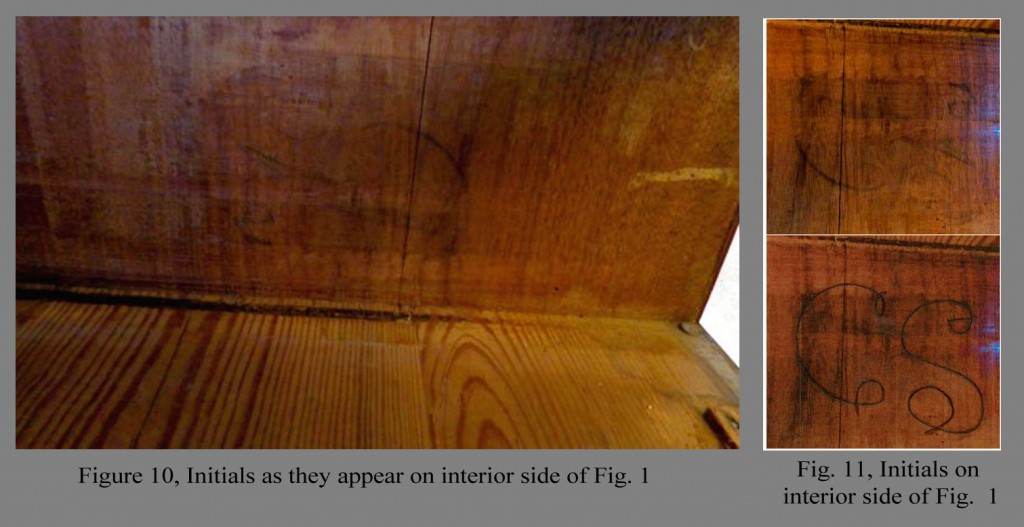 A second example of a Norfolk craftsman using his initials as construction or assembly marks is found on an early 19th century mahogany Pembroke table that descended in an early Portsmouth, Virginia family (Fig. 12, Norfolk Pembroke table).  The initials, “GH”, are found on the interior surface of both of the table’s inner rails (Fig. 13, Initials on inner rail of Fig. 12).  They are written in chalk, as are other construction marks found on the table, signifying that the initials are those of the maker.  They do not appear to have been written by the same individual who signed the Sully chest of drawers.  The only cabinetmaker with the initials, “GH”, known to have been working in the Norfolk area during this period is George Hendree.  Chester Sully had married Hendree’s 18 year old sister, Ann, on May 4, 1805 in Portsmouth.  Hendree undoubtedly trained in his brother-in-law’s shop, where he would have been taught this method of marking furniture.  He and Sully are listed as partners in a June 24,1811 advertisement announcing their intention to open a cabinet shop in Edenton, North Carolina.  On June 3, 1812, Sully announced Hendree as his new partner in his Norfolk cabinetmaking enterprise.  By July 9, 1813, Sully and Hendree had expanded by opening a cabinet shop in Richmond, Virginia.  In 1815, Hendree took sole possession of the Richmond shop, which he maintained until his death in 1834. 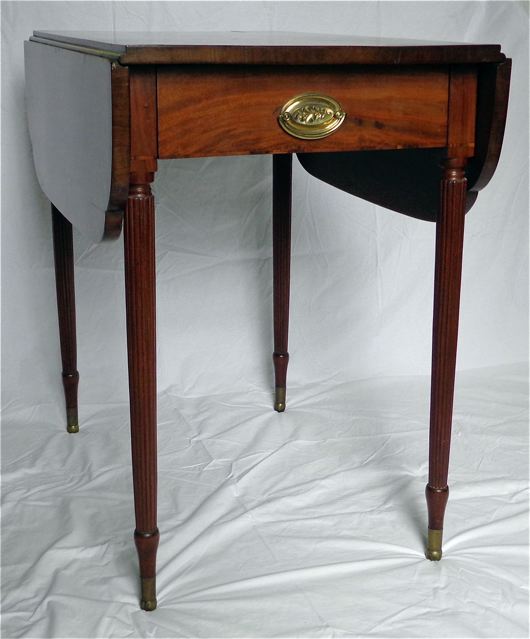 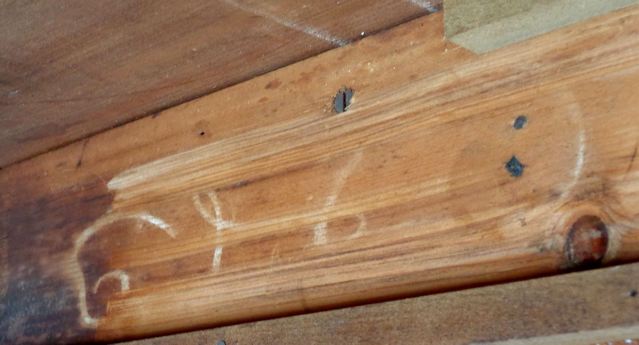 Stylistically the table, like the chest, dates to the first decade of the 19th century and was probably made by Hendree during the time he trained in Sully’s cabinet shop.  Hendree’s status as the shop master’s brother-in-law may explain the use of his own initials rather than those of the master.  Its drawer dovetails exactly match those found on the drawers of the Sully chest of drawers, further strengthening the connection between the two pieces (Fig. 14, Drawer of Fig. 12 between drawers of Fig. 1).  The configuration of its swing rails and the use of blocks on each end of its stay and swing rail assemblies are typical Norfolk features of the period (Fig. 15, Stay and swing rail assembly of Fig. 12).  While some Norfolk furniture is constructed with all yellow pine secondary wood, many Norfolk pieces are composed of a number of different secondary woods.  This table is an example of the latter and demonstrates Norfolk’s dependency on imported woods from both Virginia and eastern North Carolina sources, as well as from the forests of New England.  The table’s drawer is composed of poplar sides, a gum bottom, and a gum back rail.  Its inner rails are cypress, probably imported from North Carolina’s Dismal Swamp region.  Its stay and swing rails are cherry, a wood often found in this position on Norfolk Pembroke and card tables.

While Chester Sully’s later work has been previously identified, this is the first opportunity to identify work from the earliest days of his cabinet shop between 1805 and 1810.  Hopefully other pieces of furniture displaying the method employed by Chester Sully and George Hendree on these two examples of using their initials as assembly marks will surface.  This is just another example of the important information that can be gleaned from the careful examination and recordation of marks placed on southern furniture. 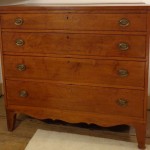 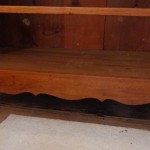 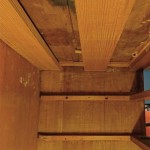 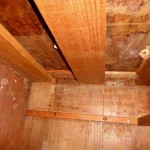 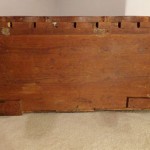 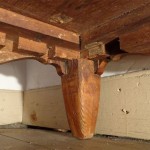 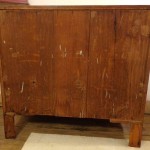 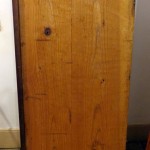 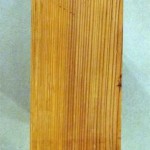 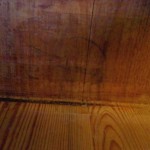 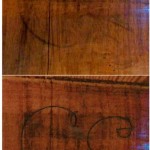 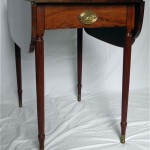 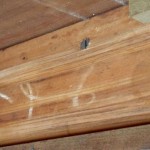 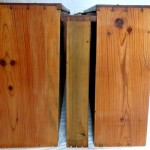 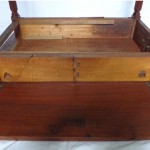