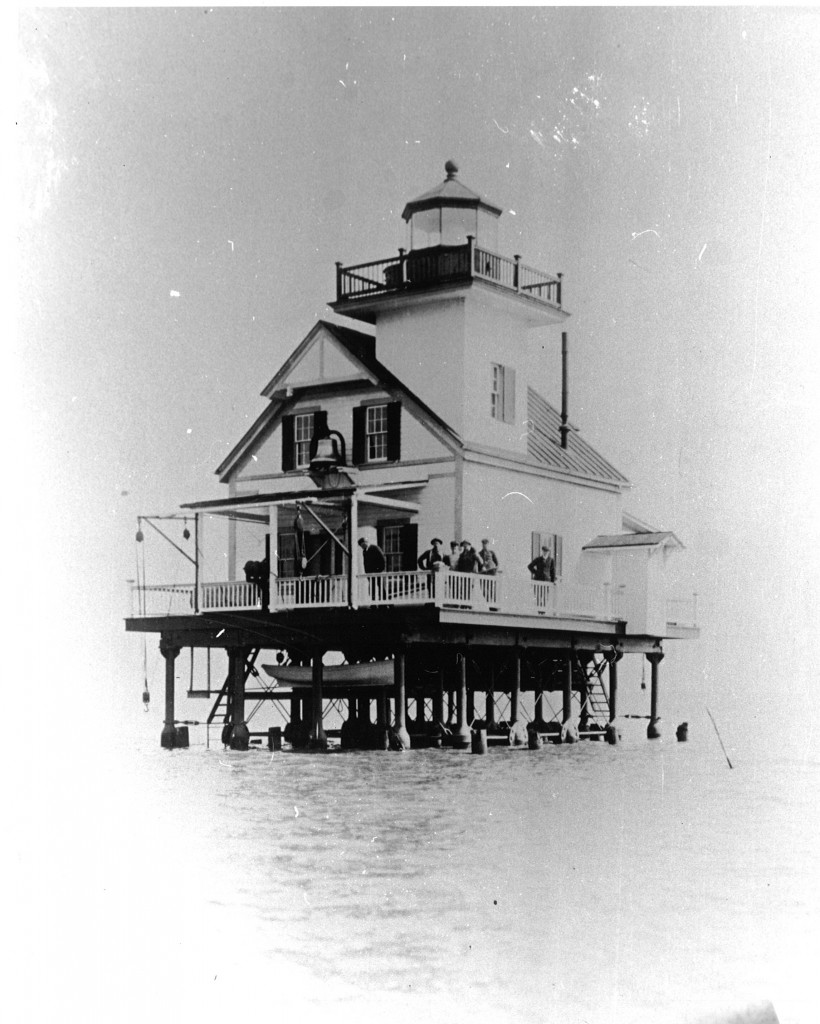 Built in 1886, the fully restored Roanoke River Lighthouse now stands proudly in the harbor at Edenton, NC 27932 (36.05581,- 76.609782).  The Lighthouse first served as a guide for ships navigating the waters of the Albemarle Sound into the Roanoke River, and then, after being decommissioned in 1941, was moved by barge across the sound to private land, where it ultimately deteriorated as a neglected residence.

After it was acquired by the Edenton Historical Commission and then given to the state of North Carolina, a band of dedicated volunteers, public officials and preservationists brought it to its final home. With state funds, the structural restoration work was completed as volunteer donations and furnishings were gathered.  Those furnishings are now  installed, as they would have looked early in the service of the Lighthouse. 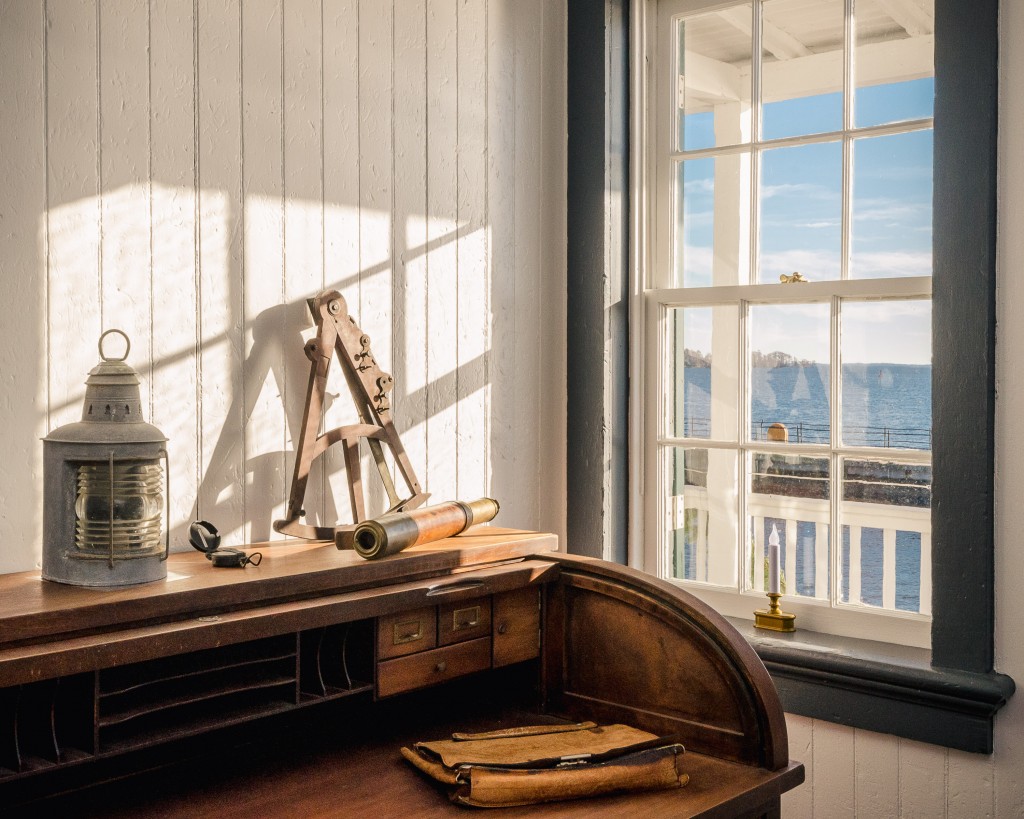 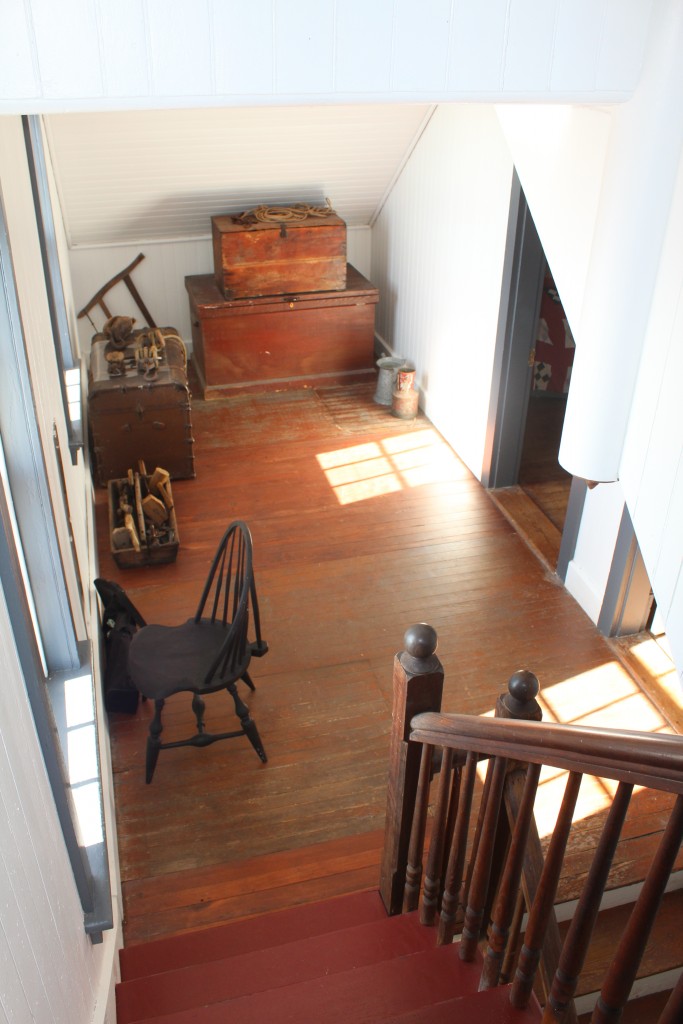 In 1866, with the war finally over and river commerce flowing again, the government built a one-and-a-half story “screw-pile” lighthouse — an ingenious design which secured the structure to the bottom of the Albemarle Sound by screwing threaded wooden piles into the bottom instead of the normal way of driving round or rectangular piles into it. This screw-pile design had gained popularity with lighthouse construction in the Chesapeake Bay area. (But that particular station was lost to severe weather.) 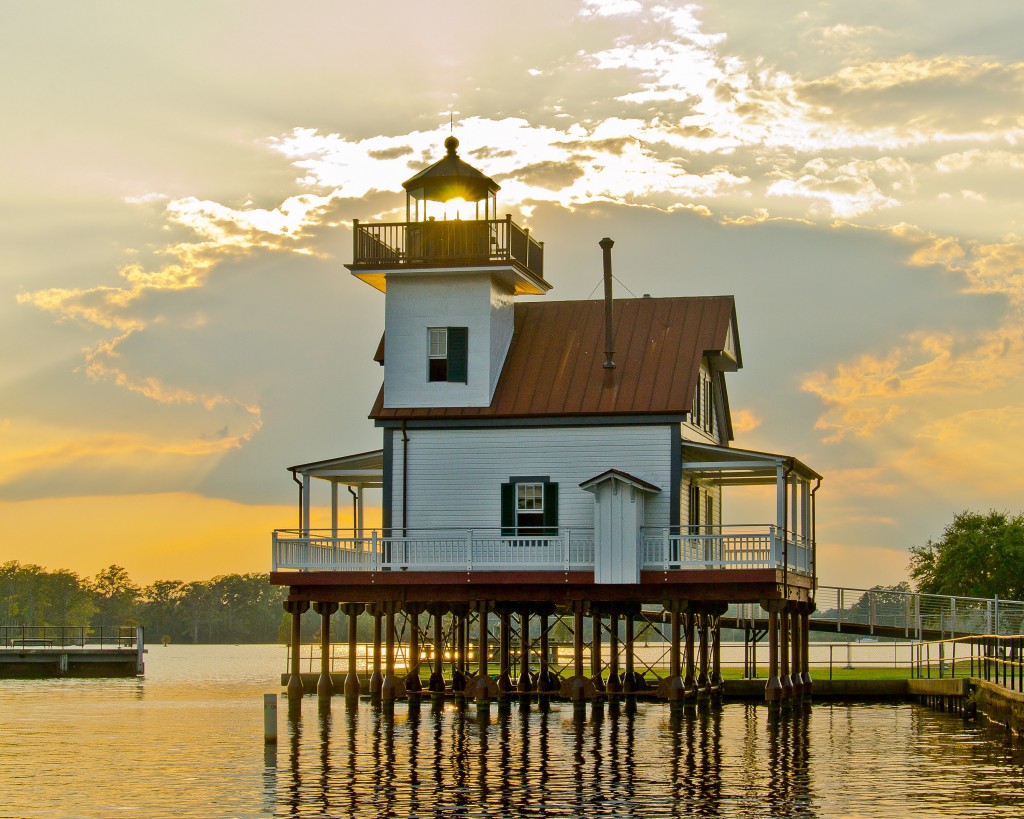 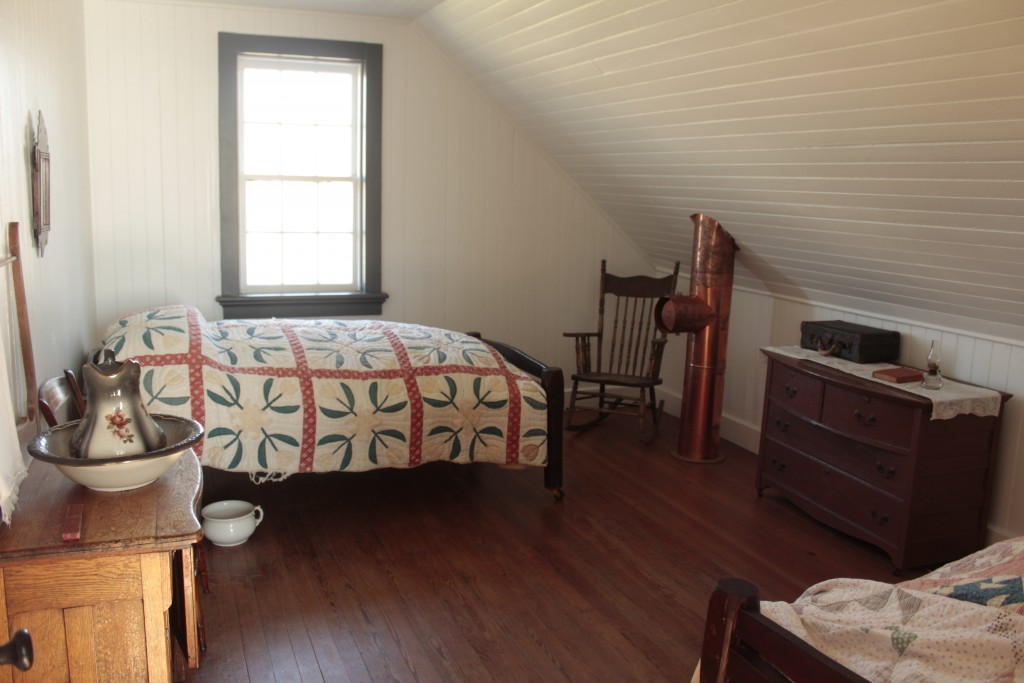 Undaunted, the government, again using the screw-pile design, built a new structure — this time with an atypical design: it had two stories rather than the usual single story, and the lantern housing the lamp, equipped with a fourth-order Fresnel lens, sat on a tower arising from a corner of the building, rather than being mounted at the center of the roof and the screw-piles were made of steel. Construction began that year, and in 1887 it was put into service. Unlike its predecessors, it survived. It served until it was decommissioned in 1941.

It is this structure, now fully restored, that we celebrate. The story of how it came here and was restored is just as interesting as how it first came into being.

In 1955, Elijah Tate, a waterman and former Lighthouse Service employee from Coinjock, North Carolina, purchased the Roanoke River Lighthouse from the Coast Guard, along with two other Albemarle Sound lighthouses, for $10 each. Tate was not up to the task of relocating them, however: he dropped two of the three lighthouses into the deep while trying. Before testing his luck with the third station — the Roanoke River Lighthouse—Tate sold it to his friend Emmett Wiggins, who often passed the Lighthouse during his work as a tugboat operator. 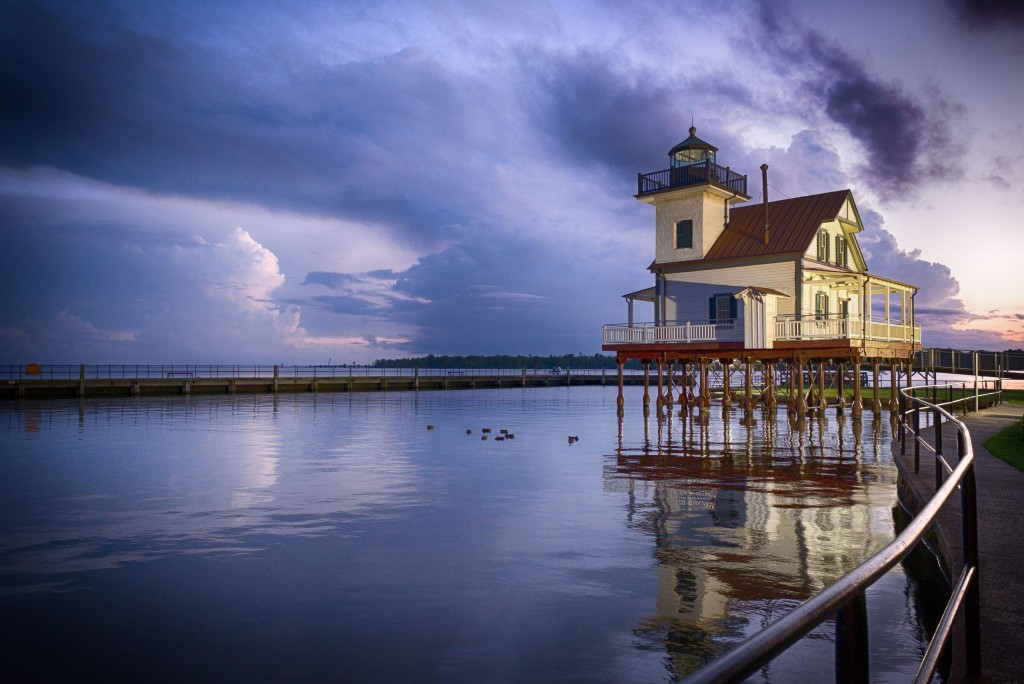 Thus, we now have five structures that met an early demise — the original lightship, the two first lighthouses, and then the two that Tate dropped in the Sound. But our Lighthouse, among them all, survived!

Wiggins, who owned a marine salvage business, used an old Landing Craft Infantry (LCI), a type of amphibious assault ship, to successfully move the lighthouse. Wiggins gave the following account of his successful endeavor: “I had an old Landing Craft Infantry (LCI) that I used as a barge, so I went out to the Light and knocked away all of the pilings except those at the diagonal corners. Then I sank the LCI down far enough to float under the Lighthouse. When I pumped the water out, the barge came up under the heavy wooden sills of the main Lighthouse structure. As soon as I cut away the remaining piles, everything floated free and I sailed back to Edenton with my new home.” 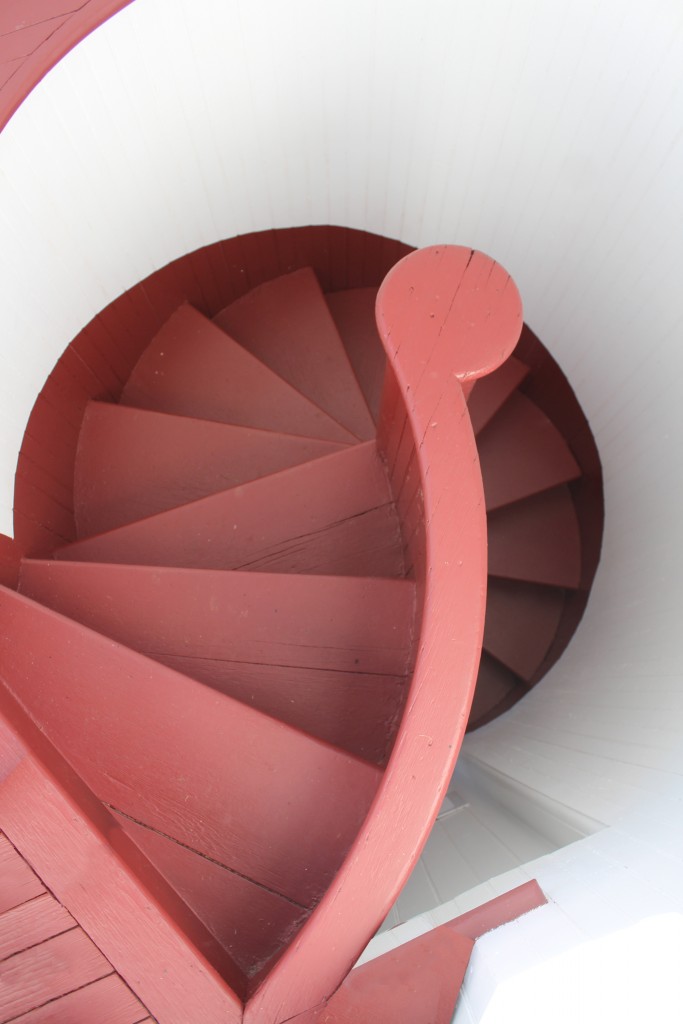 Wiggins owned a small parcel of land at the mouth of Filberts Creek in the Albania neighborhood west of Edenton. He floated the Landing Craft Infantry (LCI) on which he had moved the Lighthouse up next to the shore of his land and sank the LCI, then filled marshland around it with riprap, thereby providing a firm ground beneath his new lighthouse home. After being used as a rental property for a few years, the lighthouse became Wiggins’ primary residence starting around 1960. He lived in this Lighthouse until his death in 1995 at the age of 74.

In 2003, the Lighthouse was heavily damaged by Hurricane Isabel. The worst storm to hit the region in decades, Isabel produced a storm surge so strong that several homes near the lighthouse were condemned and had to be destroyed.

Local history buffs realized that it was the last remaining screw-pile lighthouse in North Carolina. The structure indeed had historic value and should not be left to be consumed by the coastline vegetation. Lighthouse groups began to put it on their “doomsday” lists — meaning that they believed it was in danger of being lost forever.

In May 2007, the Edenton Historical Commission purchased the Lighthouse for $225,000 and paid Worth Hare House Movers $75,000 to load the station onto a barge and move it to Colonial Park at Edenton Harbor, which they did on May 23.

In 2009, the State of North Carolina provided $1.2 million for the restoration of the Lighthouse. Then, in the spring of 2010, employees of the A. R. Chesson Construction Company, who were preparing the new site for the Lighthouse, smelled an odor later determined to be petroleum. The contamination, likely from an oil company that had previously occupied the site, led the Town of Edenton, the property owner, to file for permits to permanently reposition the lighthouse over the water instead.

Before the final move to its perch above the Bay, Chesson and others restored the Lighthouse exterior, starting in early June and finishing in mid-October of 2010. Now that the interior renovation is also complete, the 1886 Roanoke River Lighthouse is available to tour through the Historic Edenton State Historic Site.

The Lighthouse’s fog bell, which was operated by a weighted, clock mechanism, was not put back in place as part of the exterior restoration. The bell (or one like it) now is on display in Edenton’s Queen Anne Park.