(Note: This additional information about the Cotton Mill adapted from the Edenton Cotton Mill Museum of History web site (http://millvillagemuseum.org/history/).
Although located within a very easy walk of downtown Edenton, the Cotton Mill was much more than just an industrial site. It was a little village unto itself. All the attributes existed, from its baseball team competing in regional games to local community cookouts and neighborhood churches. 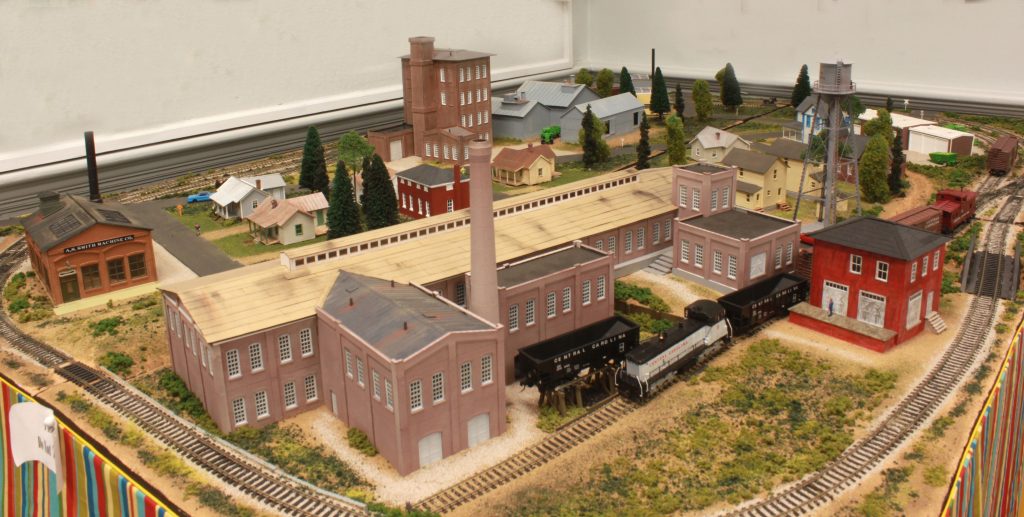 Model on display at the Cotton Mill Museum

The main building, standing today and occupied by beautiful condos, was constructed in 1900 and is a great example of an Italianate Revival brick industrial complex, a style that was popular in turn-of-the-century North Carolina. Defining the building’s character is the repetition of large segmental arched windows and projecting ceiling joist. 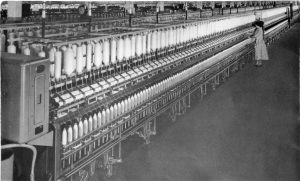 Can you imagine what it was like to work in that building with its large windows before air conditioning arrived in 1960? When air conditioning did arrive, the arched windows were replaced with brick, which was then removed early in the 21st century as the building was converted to condominium-style homes and apartments. 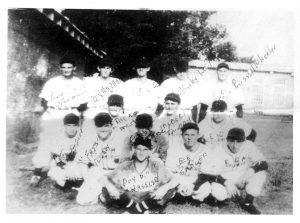 The Mill was started by 19 local businessmen and remained in local ownership until 1990. As was fairly common in industrial situations, the company also built homes for employees and at one time 70 dwellings existed for those families. Some were duplexes, others were larger homes occupied by top supervisors, but all within a baseball’s throw of the factory.
“They could walk to work, they could walk to church and they could walk to school,” said Bill Hicks, a board member of the Edenton Cotton Mill Museum of History. 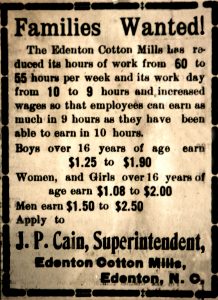 Like most other historic gems of Edenton, the Edenton Cotton Mill Museum of History is totally reliant on volunteers for both donations and keeping the museum open for the public. One of Chowan County’s great attributes is the fact that churches and organizations welcome newcomers. They do as much as the want from being docents, donors or leaders. No one has to prove they were born in Edenton to play a big role in protecting the historical and community assets of the County.
The Museum’s exhibits contain photos, old documents (like this newspaper ad), maps, and items from the Mill and Village. In the center of the room is a four-part “carousel” display, with photos from when the Mill and Mill Village were first built and on through to the present period.”