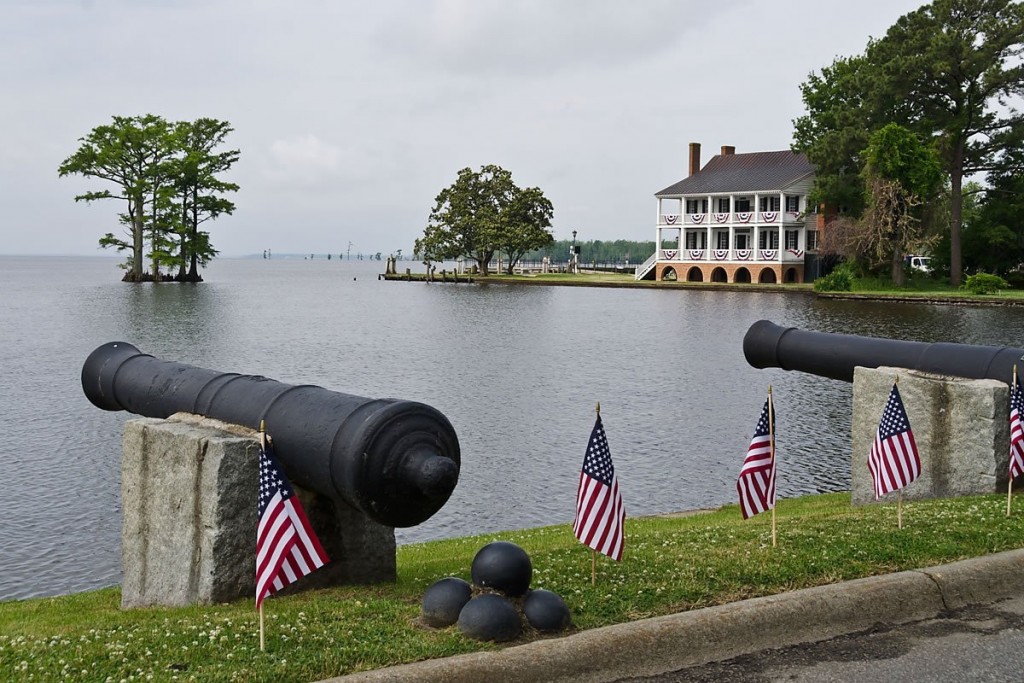 As described by Judge Tom Newbern: On October 31, 1777, a diplomatic committee sent to France by the Continental Congress, composed of Benjamin Franklin, Silas Deane, and Arthur Lee, entered into a contract at Paris for the purchase of cannon to further the cause of American independence. The House of Rey and Brandenbourg of Cadiz, Spain, agreed to supply the colonies with a large number of cannon, including twenty-eight 24 pounders and seventeen 18 pounders of “good Swedish iron”, three of which you see before you. 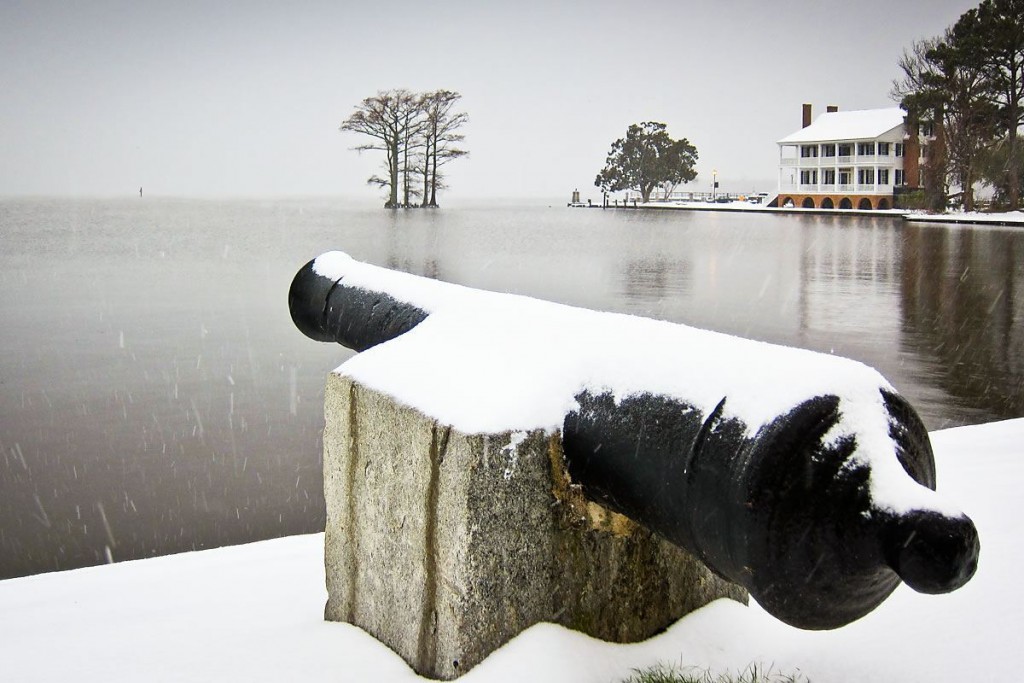 Swiss Captain William Borritz, an agent of Rey and Brandenbourg, transported these large caliber cannon aboard his ship, Holy Heart of Jesus. Although the contract called for the guns to be delivered to a port in Virginia or Maryland, or to one of four specified northern ports, Captain Borritz avoided British naval forces by entering one of several inlets along North Carolina’s treacherous Outer Banks and arrived in Edenton with the cannon in July, 1778. The Continental Congress allowed Virginia to Purchase twenty-two of the guns. North Carolina, through her agents Thomas Benbury and Robert Smith, purchased the remaining twenty-three guns, nine 24 pounders and fourteen 18 pounders, but was unable to make full payment. Local legend states the cannons were “thrown into a river near Edenton” by the unpaid captain. 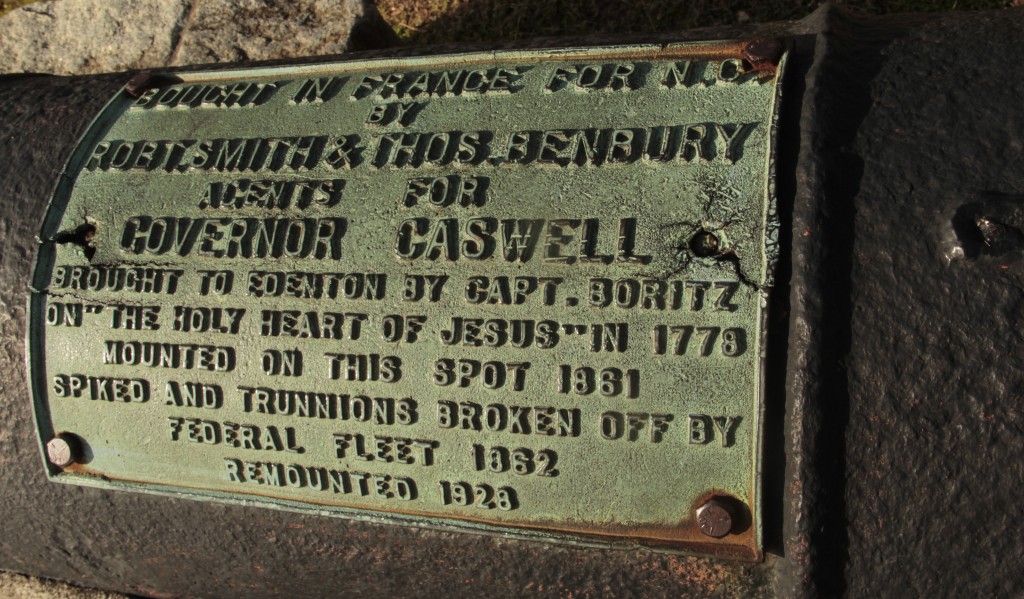 That prevent their potential capture by the approaching British forces of Lord Cornwallis in 1781. The cannon were recovered from their resting place pursuant to a December, 1785 act of the General Assembly.

Their next appointment with history occurred during the Civil War. Local lore relates that some of these Revolutionary era cannon were mounted on makeshift carriages for the defense of Edenton.

On February 12, 1862, four Union gunboats under the command of Lieutenant A. Murray visited Edenton. His report notes that there were no visible fortifications but that eight cannon were destroyed. This probably represents the spiking of these Revolutionary relics, which one Union soldier felt posed “more danger behind than in front of them”.

The inventory of Revolutionary War cannons in Edenton is as follows:

Long before military cannons were of concern, another Edentonian, Joseph Hewes, played a critical role in the creation of the first navy.  His concern related to the British blockade of Boston and the larger issue of naval assets for the battle for Independence. 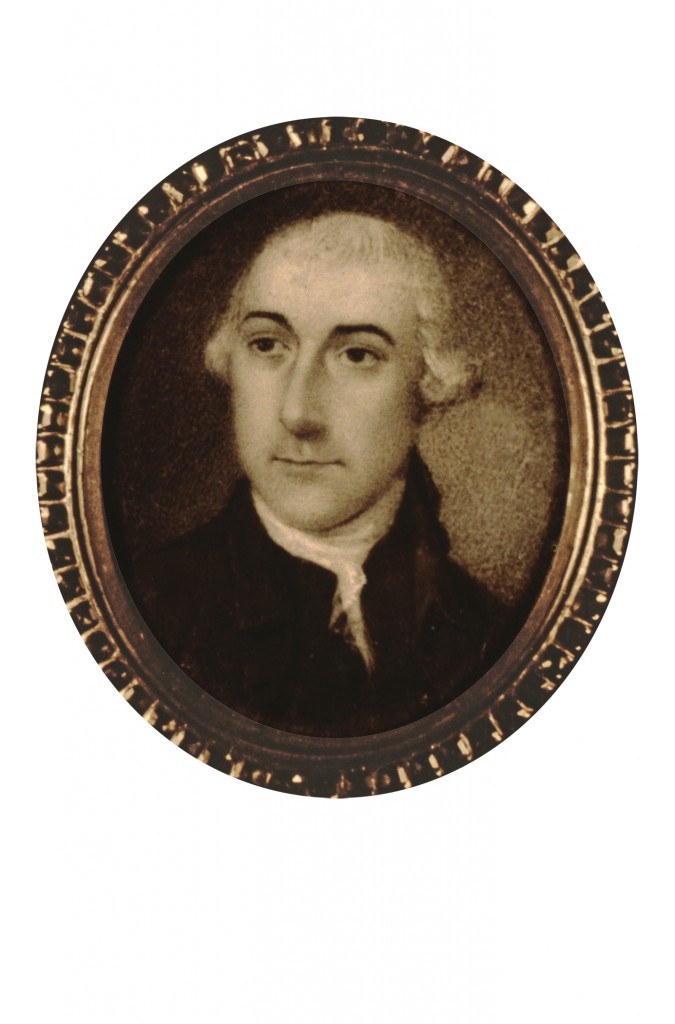 Joseph Hewes
Father of the U. S. Navy

Joseph Hewes was born in 1739 into a Society of Friends (Quaker) family on Mayberry Hill, a 400-acre farm in Kingston, NJ.

He attended Princeton (then known as College of New Jersey) and studied business. Initially, he worked in Philadelphia in what was then called a counting house.  Later he became a successful merchant and saw more opportunity in the south with its navigable waters and trade opportunities.

He moved to Edenton in 1760 to pursue his career as a merchant, where he owned a store, ships, wharfs’ and developed a highly successful shipping business.

Hewes was elected to the North Carolina legislature n 1763, only three years after he moved to the colony.

Hewes was one of three North Carolinians who signed the Declaration of Independence in 1776. He turned his ships over for military use by the forces fighting to create the United States of America.

That same year, (1776) Hewes was appointed first Chairman of the Naval Committee, forerunner of what we would today call The Secretary of the Navy. He is credited as friend and patron of John Paul Jones and for bringing him into support of the soon to become United States Navy.

John Adams is quoted as saying, “Hewes laid the foundation, the cornerstone of the American Navy”

Hewes was one of the primary reasons North Carolina called for independence before any other colony. He worked on the articles of Independence in the Continental Congress and promoted Independence.  His home stands today in Edenton and is used as a private residence.

Joseph Hewes died on November 10, 1779 in Philadelphia from an “indisposition under which he had labored for some time”. He was 50 years old.