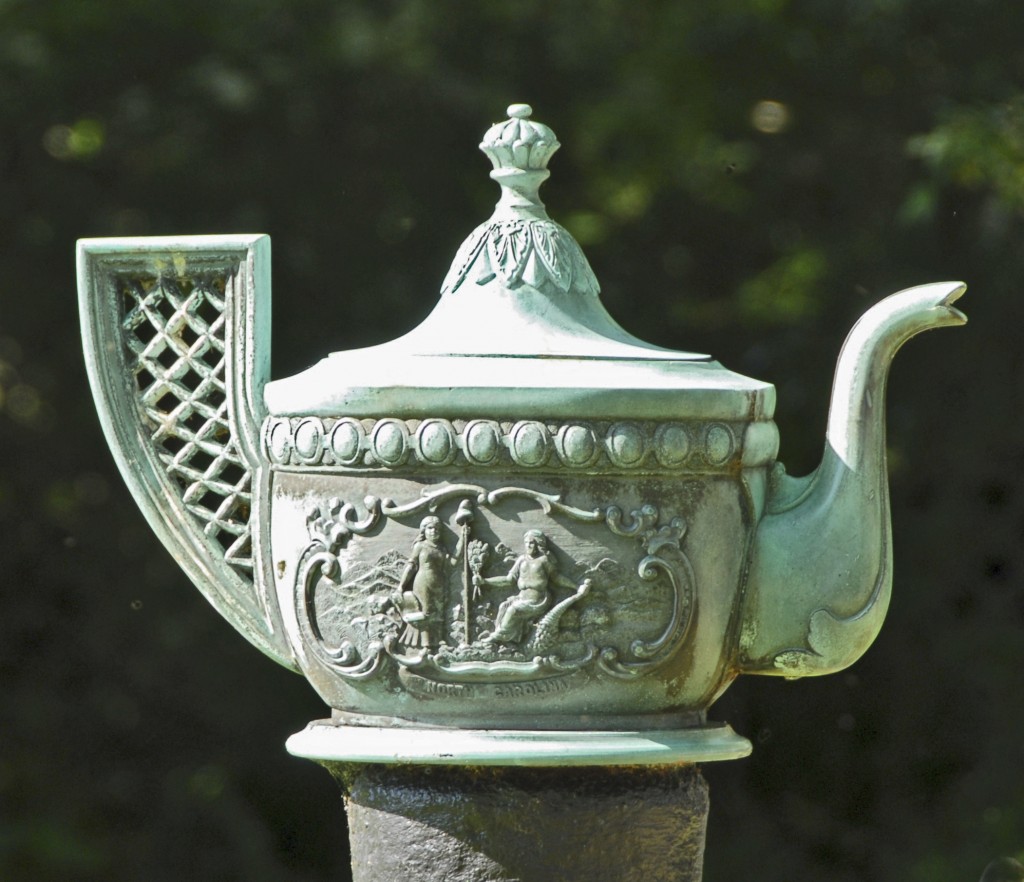 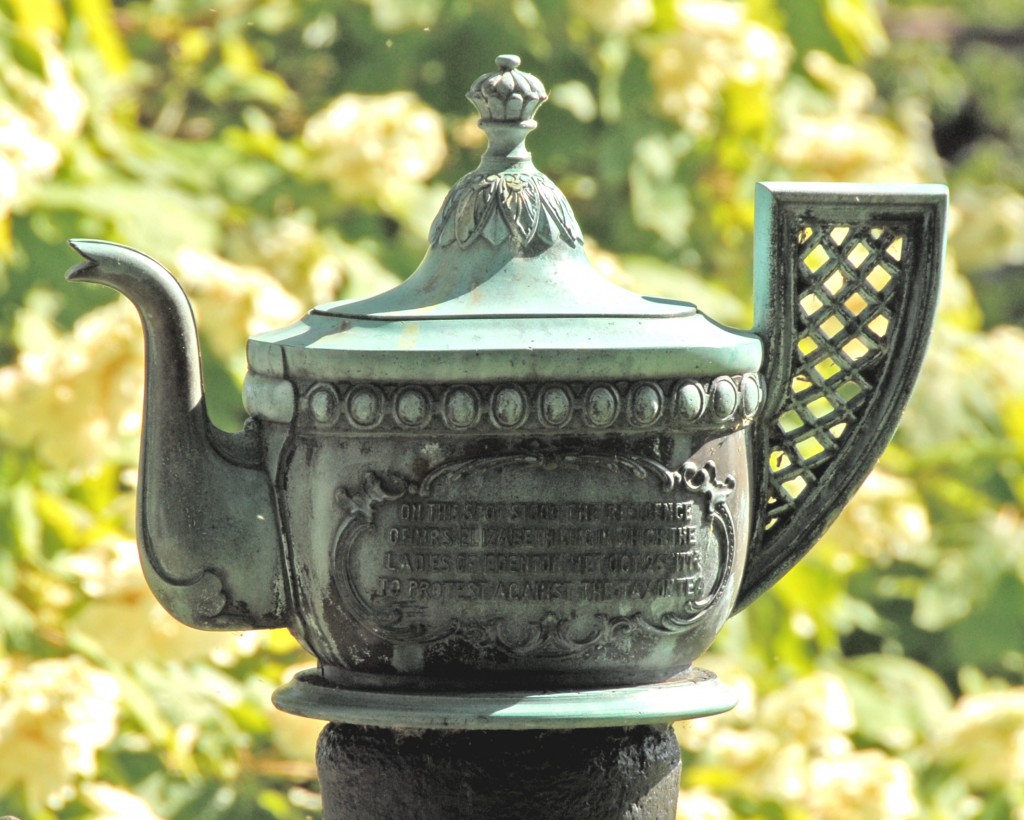 The bronze teapot sitting atop a Revolutionary War era cannon commemorates the first political action instigated by a group of North Carolina women.  Not as well known as the Boston Tea Party (where demonstrators wore disguises), Edenton’s version, carried out ten months later on October 25, 1774, was a bold revolutionary statement, unique in a male-dominated political era and public society. Under the leadership of Penelope Barker, fifty-one women publicly signed a petition resolving to abstain from purchasing English tea and cloth.  Once signed, the petition was mailed to King George and its contents made known to the British public. 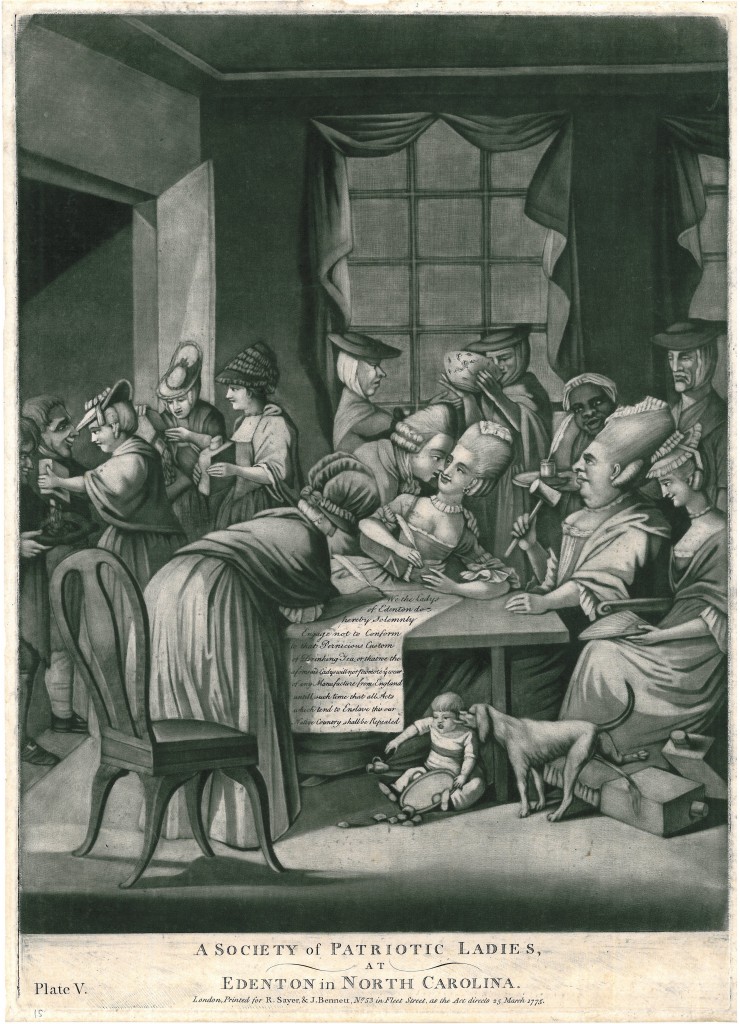 An account of the event appeared in the Morning Chronicle and London Advertiser on January 16, 1775, along with a drawing portraying the women in a less than flattering light, where the action was satirized in a  political cartoon entitled “A Society of Patriotic Ladies.”.

The bronze teapot is also a testament to one man’s vision and another’s gratitude. Frank Wood, owner of Hayes Plantation, long wished to have an appropriate marker to commemorate the action of the town’s ancestresses. He had just the model, a silver teapot once owned by Samuel Johnston, one of North Carolina’s eighteenth century governors. He was at a loss, however, as to an artisan who could reproduce a larger version of it in bronze. 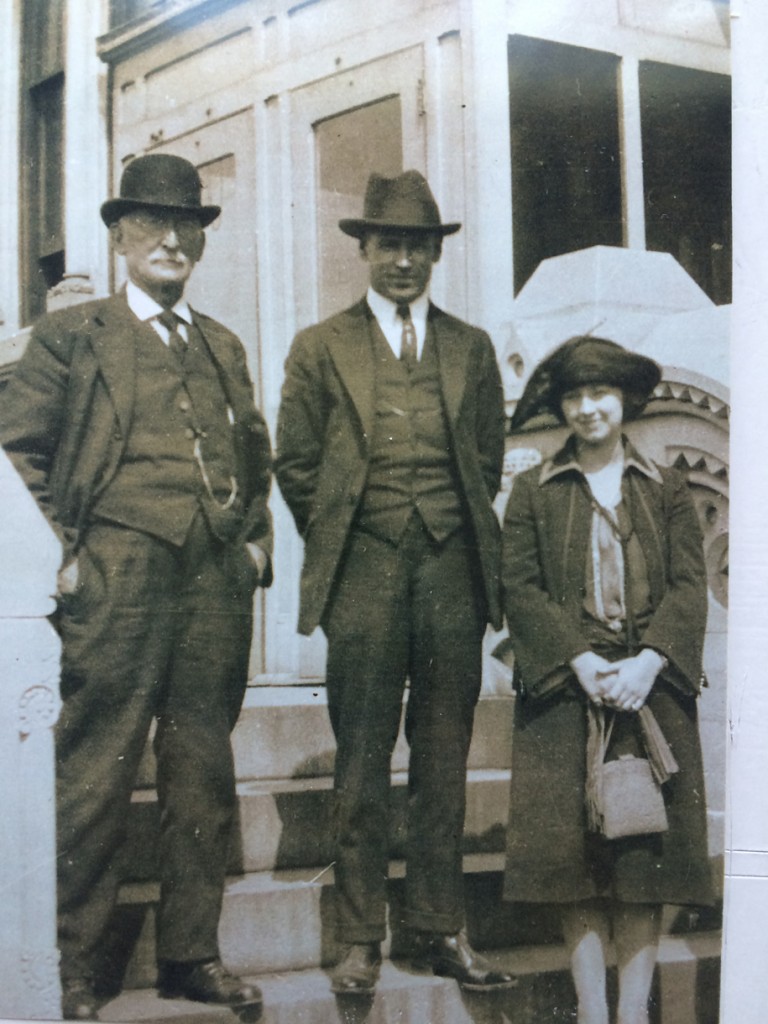 Providentially, an expert craftsman came into Wood’s life in time to make his dream a reality. In 1905 Frank Baldwin, a foundry man from Watertown, Connecticut and former Union sailor, came to Edenton to revisit the site of the 1864 Civil War Battle of the Albemarle Sound.

Quite by chance he ran into Frank Hassell, Wood’s farm manager, who invited Baldwin to spend some time on Greenfield Farm, which overlooked the scene of the battle in which Baldwin had fought. Hassell turned away Baldwin’s efforts to repay his hospitality, but at the foundry man’s insistence in finding a means to give compensation, put him in touch with Frank Wood. When Wood learned of Baldwin’s expertise, the two struck a deal: a replica of the teapot in honor of the famous Tea Party as an expression of Baldwin’s gratitude.

Although a segment of the teapot’s inscription regarding the exact physical location of the signing of the petition has been called into question it stands, nevertheless, as a beautiful monument to the patriotic courage of Edenton’s first ladies

…There has been much confusion about the Edenton Tea Party, primarily because the event went unrecorded in North Carolina. It remained unknown until 1827, when a North Carolina native naval officer purchased a rendering of the cartoon in a shop abroad. Following his discovery citizens tried to piece together what they believed must have happened in Edenton in 1774.

One of the primary errors is the belief that there was, in fact, a party of 51 women gathered at the home of Mrs. Elizabeth King, a prominent member of the Edenton community. The King home was too small for such an assembly. The wording of the resolution, too, does not indicate a gathering, but rather an agreement. There is no doubt, however, that the ladies of Edenton sent the document to England in 1774, making the resolution among the first public political acts by women in America.”

There is no evidence the event was referred to as a “tea party” until an article was published in the U.S. almost 60 years after it occurred. It was intended to be a courageous show of opposition to the British effort to dominate life in the colonies that would become the United States of America after the brewing revolution.  The first call for revolution occurred in North Carolina, but that is a different story.