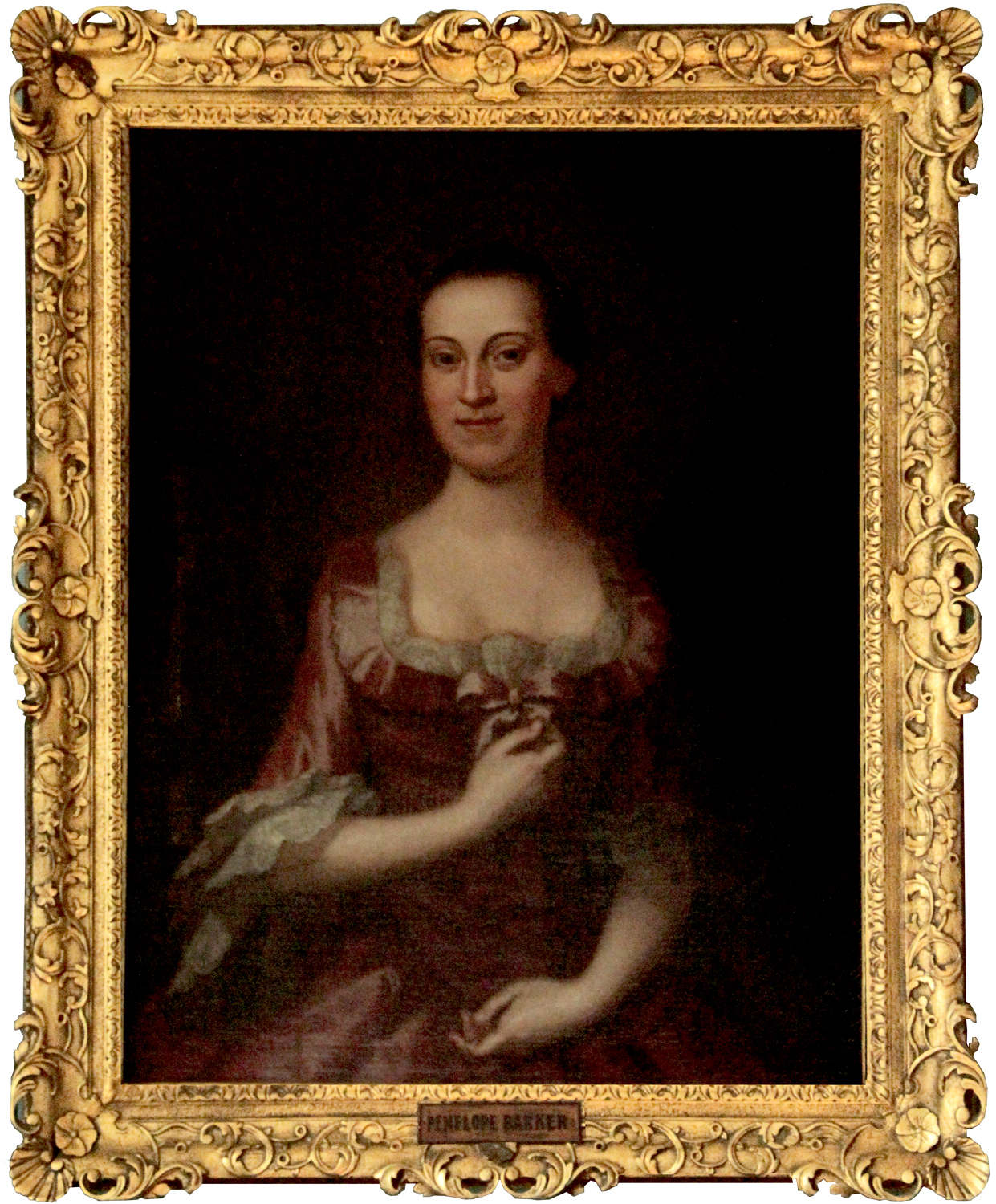 Penelope Barker may well have been one of the most courageous women in US history. At a time when women simply did not publicly engage in politics, she held a tea party. But it was not really a tea party; it turned into the earliest known political action written and organized by women in the American Colonies!

In the years 1714-1722, Dr. Samuel Pagett received about 2,000 acres in Proprietary Land Grants, including or what was already Blenheim Plantation. This area is listed on Edward Mosley’s map of 1733. It is possible that the land was granted about the same time Gov. Charles Eden (Town of Edenton namesake) appointed Pagett Justice of the Peace. Dr. Pagett was married to Elizabeth Blount, whose father was Thomas Blount, Justice of Chowan Precinct Court.(1) They had three daughters, Elizabeth, Penelope, and Sarah. Penelope was born at Blenheim Manor in Chowan (Cho-WAN) County on June 17, 1728.

While still a teen, Barker’s father and sister Elizabeth died in the same year, leaving Barker to help raise Elizabeth’s children, Isabella, John, and Robert. Barely seventeen years old, Barker married her sister’s widowed husband, John Hodgson, in 1745.(2) She was pregnant with their second of two sons (Samuel and Thomas) when John died just two years later, leaving her with five children to raise.(3) Penelope qualified as Hodgson’s administratrix, with her uncles, John and James Blount, as sureties. Her uncle, Charles Blount, panicked when, in checking her accounts, he discovered that she had little cash on hand to pay her husband’s debts. Moreover, the court threatened to take both the children and their property away from her, believing that she, a twenty-one-year-old widow with five children ranging from ages five to twelve, was not rearing and educating them satisfactorily. Subsequently, Peter Payne was appointed guardian of John Hodgson and Charles Blount of Robert Hodgson. In October 1751, the guardianship of Isabella, John, and Robert was restored to Penelope.(4)

For six years, Penelope managed her affairs by herself. In 1751, she remarried to a farmer and politician, James Craven, a native of Droughton in Yorkshire, England. Although the date of his immigration to North Carolina is unknown, he was serving as Clerk of Court in Pasquotank Precinct in 1734. He was sworn in as Clerk of Court in Chowan County in January 1740, and the following month, he was elected to the Lower House of the Assembly from Edenton. He continued in that office for six years. They had no children together before he died in 1755. Before marrying, he purchased Penelope’s property from her, which he left to her upon his death, along with all of his other property.(5) Read his will HERE. At this point, Penelope Padgett Hodgson Craven was, no doubt, one of the wealthiest women in North Carolina, if not all the Colonies.

Thomas Barker was born in the colony of Rhode Island and came to North Carolina “as the skipper of a New England bark”. In all probability, Barker was serving as the on-board factor for a New England commercial firm, sailing with a cargo to supervise its sale and to oversee the purchase of goods for the firm. Barker arrived in Edenton in 1735 and immediately entered upon a career in public service. In April 1741, he secured from Governor Gabriel Johnston a six-hundred-acre land grant in Bertie County and soon thereafter crossed the Roanoke River from Edenton to take possession of this land. Early in 1742, having settled his plantation, he married Pheribee Pugh (née Savage), widow of Francis Pugh, wealthy planter, shipowner, and member of the governor’s council. To this marriage, one daughter, Betsy, was born. Early in the 1750s, following his wife’s death, he reestablished his residence in Edenton and was elected as that borough’s representative to the Assembly in 1754. His devotion to his constituents in Edenton was evidenced by his bills to improve the inspection of exports at the port, to confirm existing land patents in the area, to repair the county’s courthouse, and to erect St. Paul’s Church in the parish. Barker’s high standing in the Assembly is best shown by his repeated selection to chair the committee of the whole and by his appointment as a member of the Committee of Correspondence in December 1758. By the late 1750s, Barker had established himself as a successful attorney in Edenton and a political leader of prominence throughout the colony. In Edenton, a thriving commercial center during the 1750s, Barker met and was attracted to Penelope Craven.(6) In 1757, at 28 years of age and having been widowed twice, Penelope Craven married Thomas Barker, who was 16 years her senior. 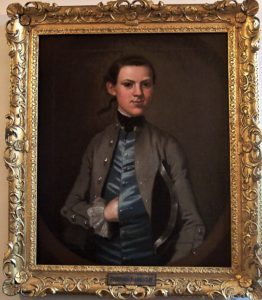 Together, the Barkers had three children, all of whom died before reaching their first birthdays. They were Penelope (survived less than two months), Thomas (less than nine), and Nathaniel (less than ten). In fact, by 1761, seven of the nine children she had either borne or for whom she was responsible had died, and in 1772 her son, Thomas Hodgson, died at the early age of twenty-five. The lone surviving child, Betsy Barker, also left Penelope’s care through marriage to Colonel William Tunstall, a prominent planter of Pittsylvania County, Va.(7)

In 1761, just four short years after Thomas and Penelope were married, Penelope found herself with only two of the nine children still living, and her husband leaving the country. A controversy erupted between the Assembly and Governor Dobbs over the selection of an agent to represent the colony in London. Thomas Barker was the overwhelming choice of the lower house, while the governor and council countered with Samuel Smith. Efforts at compromise proved futile, and both men were ultimately sent to London, Smith to represent the council and Barker the Assembly. The period must have proved a trying one for Barker, separated from his wife and friends in a strange land.

As the Anglo-American problems deepened and the movement toward open colonial rebellion accelerated, Barker’s role in London became increasingly more difficult, just as his concern for his wife and friends in North Carolina grew more acute. In June 1775, Barker and Elmsley achieved for North Carolina an exemption from the Trade Restraining Act, which had been passed by Parliament two months earlier. However, news of this exemption was received with hostility by North Carolinians, who had forced the flight of Governor Josiah Martin and who had recently heard of the opening skirmish of the Revolution at Lexington and Concord. No doubt disillusioned by the totally unexpected, bitter denunciations of his efforts and deeply concerned about his wife’s welfare, Barker, in 1776, wanted only to return to America. However, the outbreak of open warfare in the colonies and the British blockade of America made his immediate return impossible. In late spring of 1778, he was able to leave England for France and on July 8, 1778, sailed from Nantes for North Carolina.(8)

During her husband’s 17-year absence, Penelope managed their affairs, while keeping an eye on what was happening between the Colonies and England. As the colonial independence movement grew in intensity, with an increase in riots and other extralegal activities in opposition to British taxation, Penelope, because of her husband’s position, probably realized as much as any other person in North Carolina the potential costs of such actions.(9) Throughout the colonies, patriot leaders urged women, in their role as consumers, to support the rebellion by boycotting British imports such as cloth and tea, in keeping with the non-importation resolutions passed by the First Continental Congress in 1774. On October 25, 1774, some say that Barker gathered 50 women in the home of Elizabeth King, where they signed a resolution supporting the boycott as they drank tea made from mulberry leaves, lavender, and other local herbs. Others suggest that Barker actually drew up the resolution and had it sent around the community to be signed. Either way, the event, dubbed the Edenton Tea Party, is historically significant because it is the first recorded women’s political demonstration in what would become the United States of America.(10)

The better-know Boston Tea Party was conducted by men, wearing costumes to protect their identity. The Edenton Tea Party signers rejected the notion of hiding and instead publicly affixed signatures to the proclamation, which was published in London newspapers. The actions of the 51 ladies in Edenton were reported in a very negative fashion, even alleging the women were bad mothers and/or loose women. An enlarged copy of one famous cartoon hangs today in the Barker House in Edenton. Other women in the Colonies thought otherwise and emulated Barker and the women of Edenton by boycotting British goods, which soon got the attention of the Crown.

“As we cannot be indifferent on any occasion that appears nearly to affect the peace and happiness of our country, and as it has been thought necessary, for the public good, to enter into several particular resolves by a meeting of Members deputed from the whole Province, it is a duty which we owe, not only to our near and dear connections who have concurred in them, but to ourselves who are essentially interested in their welfare, to do everything as far as lies in our power to testify our sincere adherence to the same; and we do therefore accordingly  subscribe this paper, as a witness of our fixed intention and solemn determination to do so.”

Upon her husband’s return from England, Penelope and Thomas built the house that would become what we know today as the Penelope Barker House Welcome Center. Life came somewhat full circle for Penelope, in that the land where they built their home belonged to her previous husband. In the area that is now 209 South Broad Street, there were five lots. James Craven brought them all under single ownership in 1748. He sold them to, and then bought them back from the widow, Penelope Hodgson, whom he later married. After his death in 1756, Penelope inherited the property back and sold it to Thomas Barker, whom she later married. The 1769 Sauthier Map shows on these lots an earlier dwelling, numerous ancillary buildings, and a formal arrangement of gardens. Evidence is mounting that this earlier structure was actually incorporated into the current house when it was built in 1782.(11) You can read more about the house and the changes it has seen on the house’s Museum Trail page.

Thomas and Penelope had eight years together before he passed. Widowed for the third time, Penelope lived out her years in Edenton in the house they built together. She passed away in 1796 and then was buried next to Thomas in the Johnston family graveyard at Hayes Plantation, Edenton.
Penelope Barker’s former home now serves as the home of the Edenton Historical Commission, 505 South Broad St., Edenton, NC. If you have an ancestor among the signers of Penelope Barker’s proclamation, thank them for advancing the cause of women’s right to engage in politics, not to mention that matter of Independence for the United State.

The 51 signers included several relatives with comparable or similar names (as published in the Virginia Gazette, the London Packet, and the Morning Chronicle and London Advertiser):