Early Turned Chairs from the Vicinity of Tappahannock, Virginia

In 1998, Ron Hurst and Jon Prown first identified these chairs in Southern Furniture…, suggesting that the group originated somewhere on Virginia’s middle peninsula. That assertion appears to be correct, as a number of examples have since turned up in or near the town of Tappahannock. While it is likely that some of these were made in the town, known examples seem to represent the work of several different artisans or shops. Perhaps manufacture was distributed over a wider area along the south side of the Rappahannock. Most examples appear to date from the first half of the 19th century.

A related group of chairs might have originated farther up river, in the region closer to Fredericksburg. Those examples lie beyond the scope of the present essay.

The side chair in Fig. 1 illustrates several features common to the Tappahannock group—a double-orb finial, and also a coved foot (the latter resembling those of Halifax County, NC chairs). Adult-sized examples invariably display three slats. Like all chairs in the group, this one has front and rear stretchers standing lower than corresponding stretchers on the sides. Unlike any other member of the group, however, it boasts a hybrid seat, composed partly of splints and partly of rush cords. In a dozen years of looking at VA and NC chairs, the writer has seen no other instance of this construction. 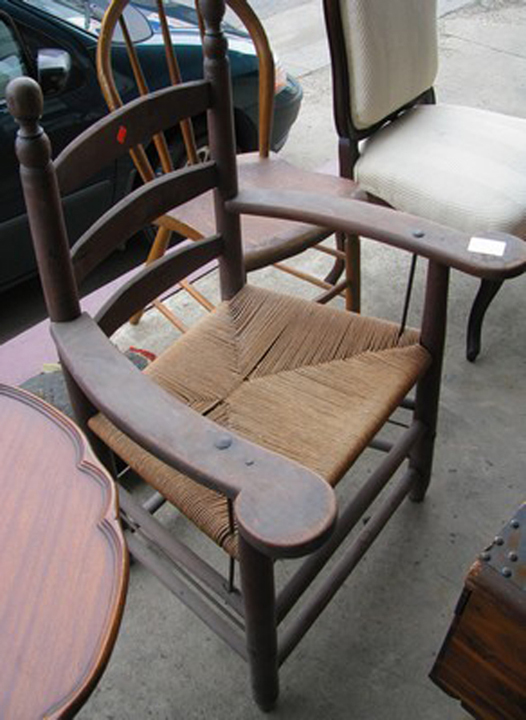 Illustrated in Fig. 2 is a chair displaying unusually broad arms with large, circular hand-holds extending beyond the supports. A small fastener identifies the point where each arm attaches to its support. At the rear, these arms cope around the rear stiles. Iron reinforcing rods extend downward through the seat lists and into the side stretchers below. These ties were almost certainly added near the end of the 19th century, or early in the 20th. The unusual heft of the lists and stretchers made that addition much easier. The chair back, with its tightly compressed and heavily chamfered slats, is typical. The paper seat is modern. Not examined. 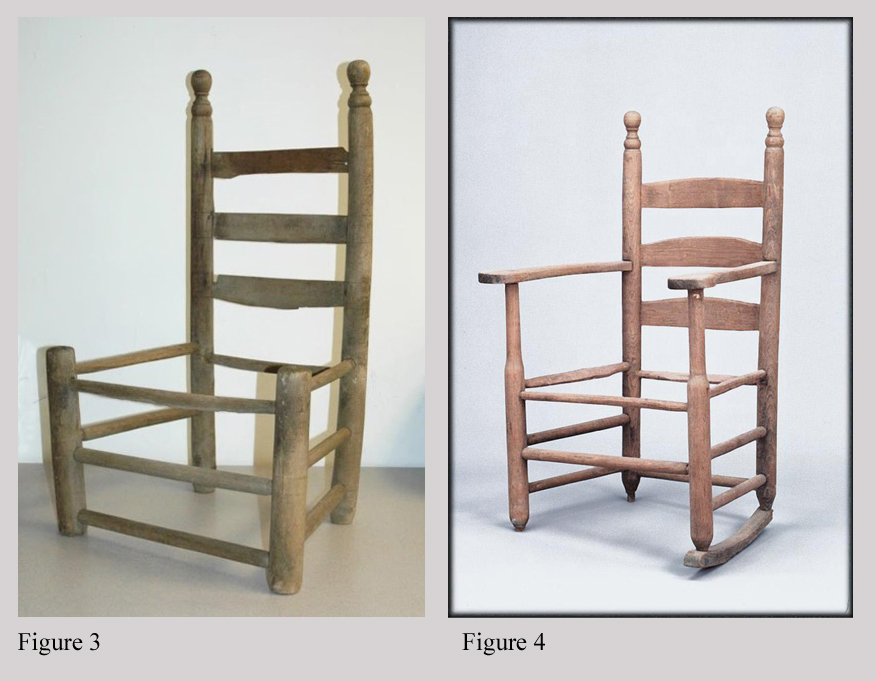 The youth chair on the left (Fig. 3) illustrates another of the forms that were available when these chairs were in production. All three slats have been replaced and/or inverted. As seen on the previous chair, these slats are closely set; but here, the rear stiles and finials extend well beyond the top member. The front feet are gone, but those in the rear, with their squat taper, allow us to imagine the chair in its original state.

The rocker illustrated at the right (Fig. 4) appears to have been made by the same artisan as the child’s chair. Now held in the collection of Colonial Williamsburg, it displays the same tall finials and compressed back as the side chair but with all the original slats surviving. (Note how in both cases the upper orb of the finial displays a slight downward taper). Again, the arms bow outward slightly, running over the supports and terminating with circular hand-holds. The supports are unadorned, being simply choked-down extensions of the front legs.

There can be no doubt that this chair was made as a rocker. Its turned-down feet dowel into runners, which are laid flat—typically a later detail. (Examples appear on Boston-style rockers that are unlikely to date before 1830). Rocking chairs first appear in Virginia probate records after c. 1830, so this example, and the corresponding side chair, were surely made sometime after that date.

Among the collection of chairs composing this group, we have seen that the finials of this rocker and the preceding side chair are distinctive, having a vertically elongated orb above a reel and compressed orb. Also distinctive in the case of this rocker is the single front stretcher and the absence of verge lines on the legs. Added to the late-style runners, these latter-two attributes suggest that this rocker might date well after the middle of the 19th century, and thus the side chair as well. However, on the other hand, the aerofoil shape of the seat lists, a pre-industrial attribute, would suggest that these chairs were made earlier in the 19th century.

This well-wrought chair shares the elongated upper orb in the finials of the two previous examples, and also the short, rapidly tapering (rear) foot. Perhaps it was made in the same shop (Fig. 5). The upper sphere of the finial is adorned at its equator with two scribed lines. Below the seat, the stretchers choke down with a beveled turning at the tenons, the sides of which are shaved to a polygonal shape to avoid turning. The chair seems to be composed of soft maple, but with hickory stretchers. The rush seat is woven in a hipped miter configuration, a significant detail, since it appears to be original. The wood bears no evidence of paint and might have been delivered to the original patron “in the white.”

The chair was purchased from an antiques dealer in Tappahannock. 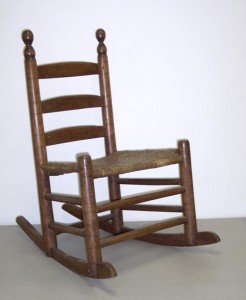 The youth-sized rocking chair in Figure 6 represents another of the available forms in this group. The chair must have begun life as a rocker, judging from the neatly clipped feet and the bottom tier of verge lines, which served to locate front mortises for the runners. The finials resemble those of the arm chair in Fig. 2. On the legs of this chair, paired verge lines were scribed in at the seat and also at the stretchers below, an attribute that seems to have been associated with 19th-century chair-making practice. Each line centers on a stretcher or seat list. At the seat, a wide separation of these lines indicates that the tenons of adjacent seat lists did not interlock—the wider this spacing, the more warped the plane of the splint seat. Like most chairs of the Tappahannock group, this one has very heavy stretchers. 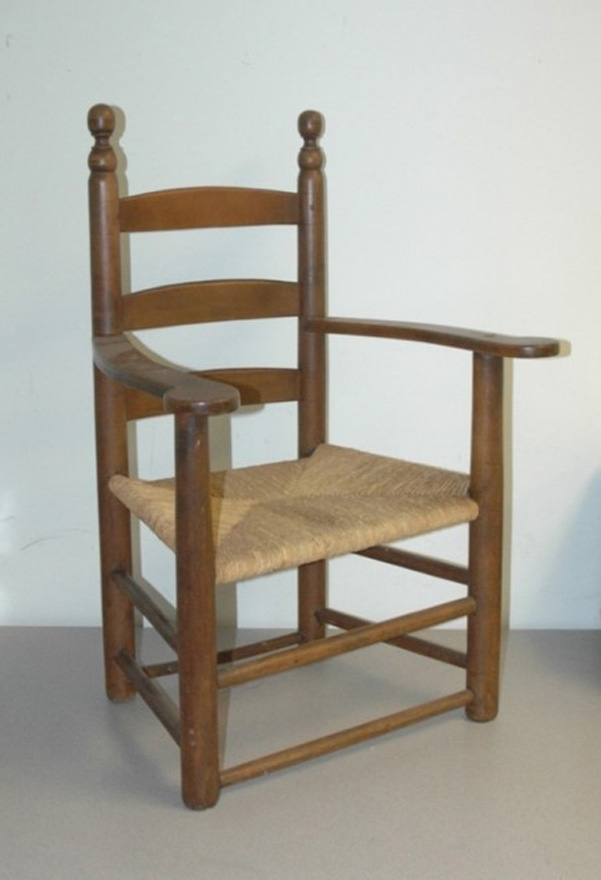 Youth-sized chairs were available in an armed version. This one (Fig. 7) bears an inscription supposedly dating the chair to 1697. Unfortunately, it is spurious. The chair probably dates no earlier than the first half of the 19th century. Again, the hand-holds are circular, extending well beyond the supports, and both arms cope around the stiles. Each of the arms attaches to its support with a handmade screw, suggesting manufacture sometime before 1846, when machinery for cutting sharp “gimlet”-tip screws was patented. The arm supports are simply unadorned extensions of the front legs. Again, the stretchers are quite heavy, and only the top slat is pegged. Judging from the finials, this example might have come from the same shop as the chair in Figure 4. Traces of green paint remain; the seat is a modern replacement. 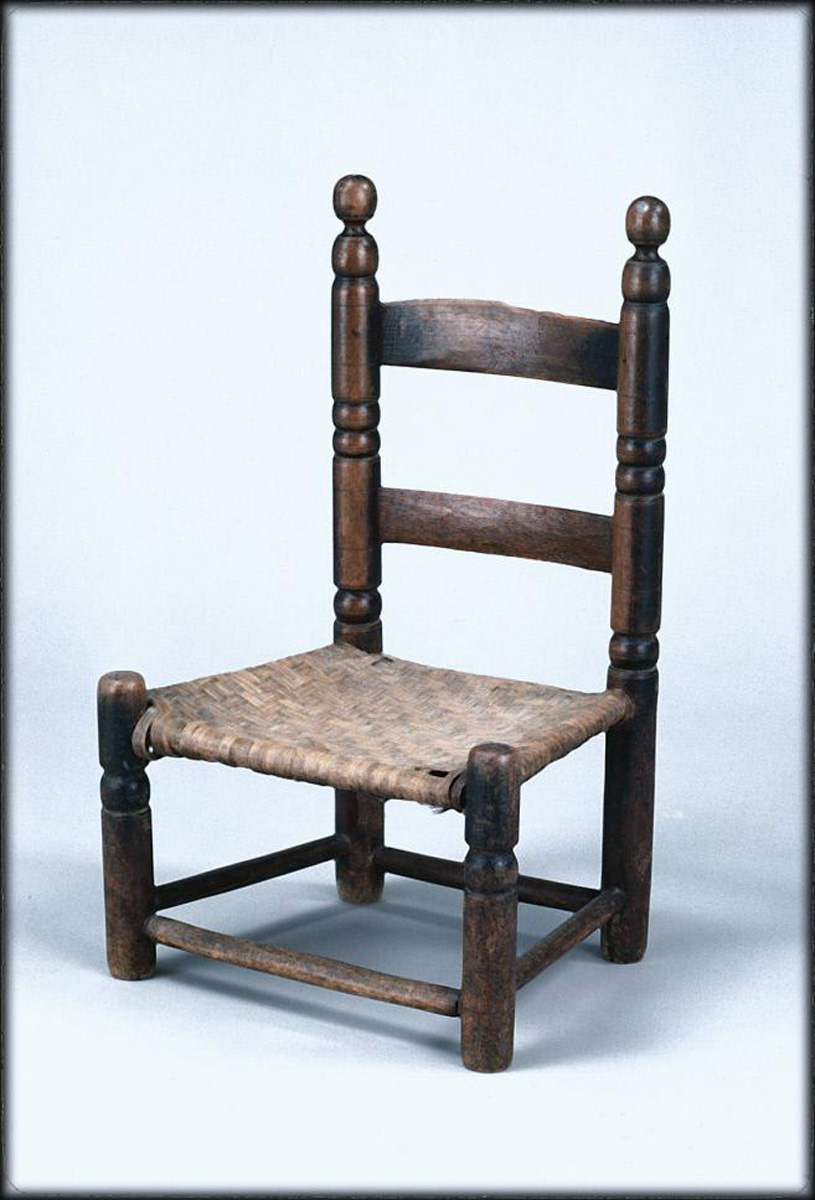 This child-sized side chair (Fig. 8) exhibits turned enrichments on all four legs, and the groupings of ornaments all differ from one another. Among a handful of examples from the Tappahannock group, this is the best-appointed chair for a child. Owing to its small scale, there is only one tier of stretchers. Like other chairs in the group, this one has pegs in the upper slat only. The date of the splint seat is uncertain. 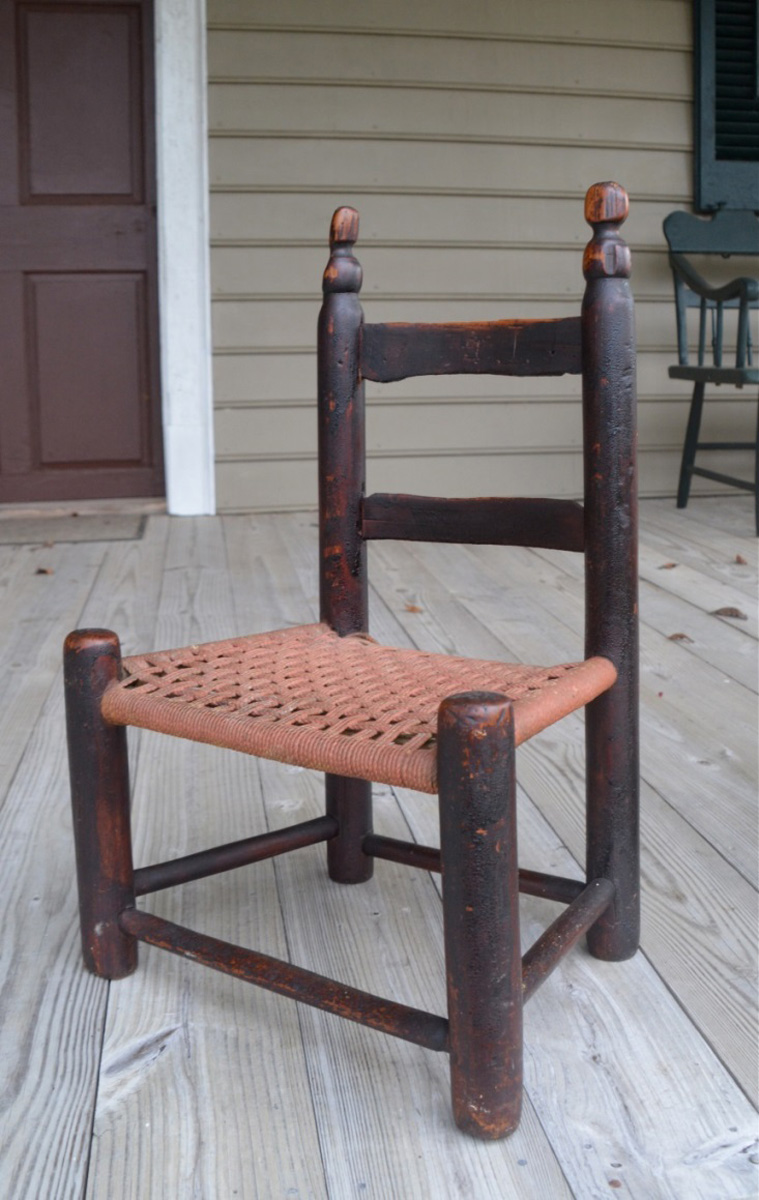 The chair in Fig. 9 is a simpler version of the previous example. It was associated with Thomas Burke Garnett (1811-1881) of Kalamazoo Plantation, Essex County, VA, 1811-1881. Judging from Garnett’s dates, the chair is likely to have been made sometime around 1814-16. It is a rare attribute of children’s chairs that they can be dated with some precision when the original occupant is known.

The shoulders on the stretchers are angled where they enter the mortises. The slat is carved with Garnett’s initials, “T.G.” The original brown paint remains. It is evident that the slat bearing those initials has been inverted. This important specimen also helps build the case for manufacture in Tappahannock or the surrounding region.

Smaller still is this tiny child’s chair (Fig. 10), which also bears two inscriptions: “St John” and “Fannie.” On November 7, 1825, Frances St. John married Lewis Seward Bristow in Middlesex County, Virginia. (Marriage Bonds, 7 November 1825, p. 93. William St. John, deceased, father of Frances and her mother, Nancy, was the guardian, Ibid., p. 13.) Frances, or “Fannie” had been born in Middlesex County in 1805. That might suggest that this diminutive chair was made sometime between 1807 and 1810, but it is clear that Fannie’s name was added, so the chair might have belonged first to an older sibling. Here, then, is another of those rare things, a chair that offers textual information concerning the time and place of its manufacture. Not examined.

Fig. 11 illustrates a disembodied chair leg, obviously related to the group under discussion. The finial differs from other examples we have reviewed, having a very tall, very slender reel separating the squat ball below from the vertically elongated one above. Perhaps it represents another shop or individual artisan. It is a rear leg, with mortises for slats, stretchers, and seat lists. Each of the round mortises is flat at the bottom and so was drilled with a “pod” or chair-type bit, having no lead screw or spur. The verge lines scribed onto the leg center on these mortises. The inner cheek of this rear leg faces the camera. The deployment of the mortises shows that the rear stretcher stood lower than the adjacent side stretchers, an arrangement that is almost universal among the chairs of this group—well almost. 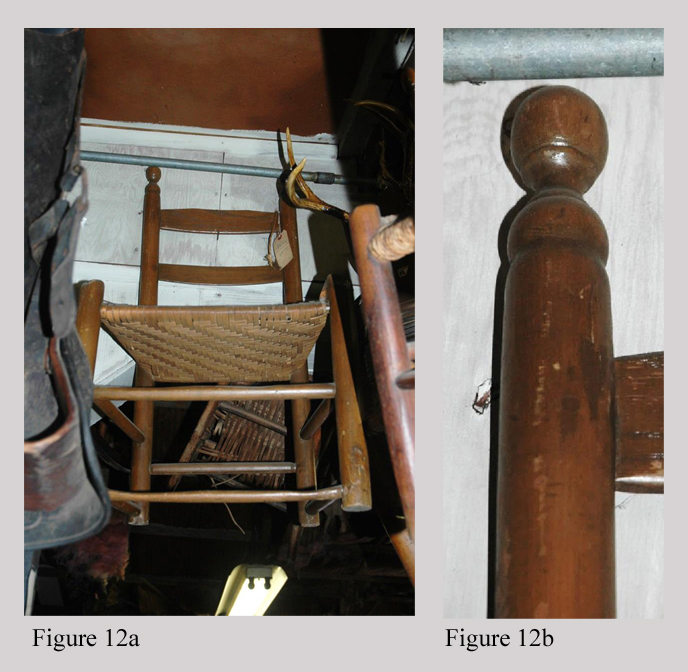 The chair appearing in Fig. 12 is the exception. It is unusual in having its rear stretcher elevated above the side stretchers and is the only such example noted in this group of chairs. The feet have been cut, and the seat is a modern replacement.

The chairs considered here constitute a numerous, visually cohesive group, one for which there is reliable information about the locality of manufacture. Several examples have turned up in Tappahannock, and a large set remains in the possession of an old Essex County family, at their original home place. Together, these examples affirm earlier conclusions about the origin of the group somewhere on the “Middle Peninsula” of Virginia.

The diversity of the group, in regard to detailed workmanship, suggests that more than one artisan or shop produced these chairs and that the idea of this particular design embraced a region wider than any one town or rural locality. In speaking of a “Tappahannock group” we should probably think Tappahannock and the surrounding region.

Placing this group “on the ground” provides a hard shoulder of information from which to push on other groups we know less about—related groups that are also believed to originate in the Rappahannock River Basin. The more pins one can reliably stick in the map, the easier this task will become.

The range of forms produced by the various makers tells us something about the types of people for whom such chairs were made, adults of course, but also children, and the elderly. At the same time, the appearance of at least two original rockers (see Figs. 4 & 6) allows us to study and identify and enumerate the attributes of a post-1830 chair.

The study of this group is one more “brick in the wall”, one more step in an ongoing effort to identify the geography, products, and practices of early chairmakers across North Carolina and Virginia. 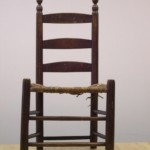 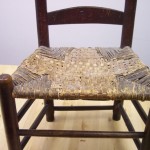 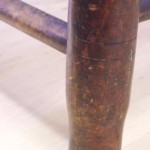 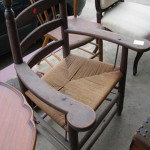 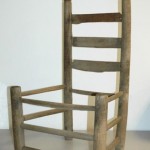 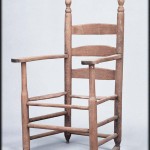 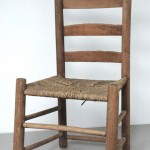 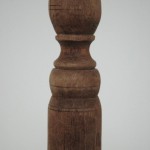 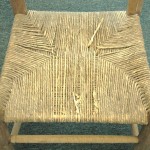 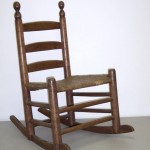 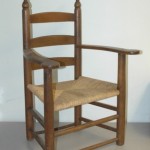 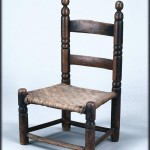 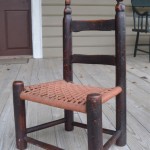 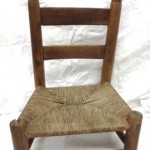 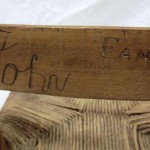 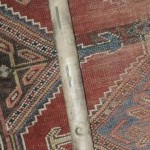 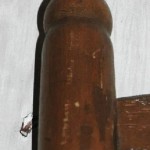