What Is In A Name?

More specifically, what is in a signature? Considering the extensive interest in and scholarship on antique furniture and historic architecture in the South, a lot is in a signature. Finding a signature of a maker vastly increases the intellectual value of the subject piece or building. A signature can increase the monetary value as well.

In conducting the research for our book, WH Cabinetmaker A Southern Mystery Solved, we discovered numerous signatures on pieces of furniture and on architectural elements from the lower Roanoke River Basin in northeastern North Carolina. These eighteenth- and early nineteenth-century signatures were key in identifying the WH cabinetmaker, William Seay, as well as other cabinetmakers and house joiners in the region. By identifying the local individuals who produced these signatures, we were able to unravel and explain a vast array of cultural, social, economic, family, and shop/trade dynamics. All of this is discussed in detail in our book.

Signatures on architectural elements and furniture, from wherever, take many forms from full names with dates and locations, to initials, to ciphers, to symbols. Roughly, from the eighteenth century into the first quarter or so of the nineteenth century, signatures commonly are found executed in paint, pencil, ink, chalk, or scratched or incised into the wood. Also, signatures stamped or burned with a brand or marked with a crayon are encountered, generally in the nineteenth century. More often than not, signatures are overlooked. They have faded with time, are worn, are damaged, are in obscure locations, are mistaken for miscellaneous shop/construction marks, or are simply missed. The key in finding signatures is to look carefully. Examine surfaces diligently under varying light conditions, have more than one person look, and do not dismiss any mark. Also, photographing surfaces and manipulating the images in Photoshop often reveal marks and signatures no longer visible to the naked eye.

The stated purpose of this research note is to present information on recently discovered Micajah Wilkes signatures on furniture and architectural elements that have come to light since the publication of WH Cabinetmaker…. Wilkes worked both independently and with William Seay in cabinetmaking and house joinery in the lower Roanoke River Basin. He was married to Seay’s sister, Annie, and they resided in what is now the Roxobel area of Bertie County near Seay. Wilkes primarily used simple incised initials, but he also liked experimenting with ciphers.

The cabinetmaking forte of Micajah Wilkes was bottle boxes or cellarets. Several signed examples are known and are illustrated and discussed in our book. Most are marked simply with an incised MW in block letters (see Fig. 374 in WH Cabinetmaker…). However, Wilkes’ most important cellaret is his iconic example with inlaid script initials, JS and MW. He built this piece for his wife to honor her father, James Seay, and himself as maker (see Back Cover & Fig. 370 in WH Cabinetmaker…). Interestingly, this cellaret also bears a large incised MW cipher under its lid (see Figs. 375 in WH Cabinetmaker…). Ron Hurst, VP and Chief Curator at Colonial Williamsburg, discovered this cipher when we had the cellaret in the Department of Collections photo lab for photographer, Craig McDougal, to do his magic for our book. The cellaret is privately owned.

We previously had seen several variations of Wilkes rather sloppy MW signatures on various other pieces of furniture he built, but this was only the second example we encountered of his attempt at a cipher. The first MW cipher is in pencil and is on a fallboard support of a Seay block-front desk (see Figs. 70 & 389 in WH Cabinetmaker…), and it is a simple superimposed MW. True to Wilkes’ form, the cellaret cipher, too, is hastily done, not at all artistic. At first, it appears to be random unexplained scratches under the lid on a finished surface in a location that was meant to be seen. Upon closer study, his MW initials, probably incised with a scratch awl, can be ascertained by most. Some still are not convinced and think the marks are just random scratches. However, in our experience, trades people seldom try something just once. Consequently, we were not surprised, but nevertheless pleased, when we discovered a third Micajah Wilkes cipher (Fig. 1). Please note that with some signatures illustrated in our book, the upper portion of the figure is the actual signature as seen in situ. The lower portion of the figure shows the signature or cipher enhanced for clarity. We have followed this practice, where appropriate, in this research note. In the enhanced portion of Fig. 1, the M is highlighted in red and the W is in blue. 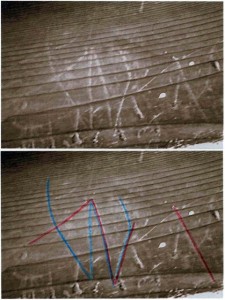 Unfortunately, the discovery of this third cipher was after the publication of our book. Wilkes incised this small cipher, only several inches across, on an architectural element in a cubby off the back stair in Hope Plantation near Windsor, NC. In this instance, Wilkes used a cut nail to execute his signature. The double point on the cut nail, an artifact of the shearing process in the manufacture of the nail, is reflected in the parallel scratch marks in this cipher.

William Seay was the undertaker for the construction of Hope, and other journeymen, including Wilkes, as well as apprentices were involved.  Wilkes likely signed this element to identify his piecework in order to be paid by Seay. In our book research, we found numerous cases where joiners and cabinetmakers marked their piecework for payment, both on pieces of furniture and on architectural elements. We also discuss this concept in our book.

Upon reexamination of the William Seay map case now in the Hope collection (see Fig. 325 in WH Cabinetmaker…), we discovered yet another Micajah Wilkes cipher, a total of four so far and the beginning of a trend. We are comfortable that as research on the material culture of the Roanoke River Basin continues, even more Wilkes ciphers will be found.

This fourth cipher, located on the secondary top framing of the map case under the finished show top, is executed in chalk. This cipher, similar to the cipher under the lid in the great cellaret, is large. It is roughly a foot or so across. Here, Wilkes decided to add some flourish in the form of scrolls to his cipher (Fig. 2) as well as a Sharrock-style shop mark (see Figs. 227 & 228 in WH Cabinetmaker…). While his signing efforts were naïve, his signature is there. As with his cipher on the fallboard support, Wilkes most likely assisted Seay in the construction of this piece and tagged his work for payment. In the enhanced portion of Fig. 2, we have highlighted the M in red, the W in blue, the Sharrock mark in green, and the scrolls in white to show more clearly the elements of this Wilkes cipher. 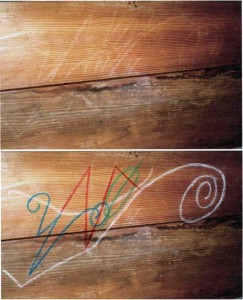 The final item to be discussed in this research note is a walnut, fall-front desk with secondary wood of yellow pine (Fig. 3). At first glance, this desk appears to be typical work of the Sharrock family. However, the old saying, “the devil is in the details”, applies here. The detail of most consequence is the clear MW signature of Micajah Wilkes on the fallboard support (Fig.4). The Sharrock family migrated from the Sandy Run area of Northampton County, NC to present-day Roxobel in Bertie County to be near William Seay. Seay was the major player in the Roanoke River Basin in cabinetmaking and house building. The Sharrocks wanted to cash in on the plethora of work Seay had at his disposal. In WH Cabinetmaker…, we discussed the symbiotic relationships Seay enjoyed with numerous local trades people, including the Sharrocks and Micajah Wilkes. As a result of these relationships, there is a large cross-pollination of construction and aesthetic details produced in the Roanoke River Basin. For example, it is not at all uncommon to find pure work by the Sharrock family, Seay, Wilkes, and others as well as hybrid work incorporating elements and ideas from different journeymen. This desk is a prime example. 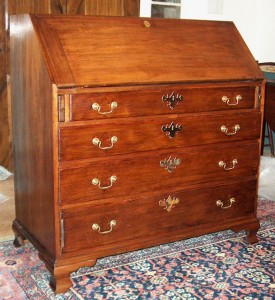 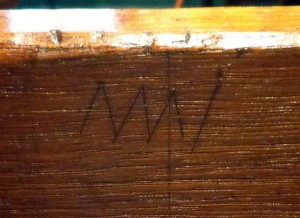 While on the surface the desk appears to be Sharrock work, it obviously was made after the family move to Roxobel as it has the signature of Micajah Wilkes. As mentioned earlier, Wilkes lived in the Roxobel area. Did the Sharrocks build the desk with Wilkes participating with piecework? Did Wilkes build the desk borrowing Sharrock features? Good questions. There is an answer, and it is in the details. 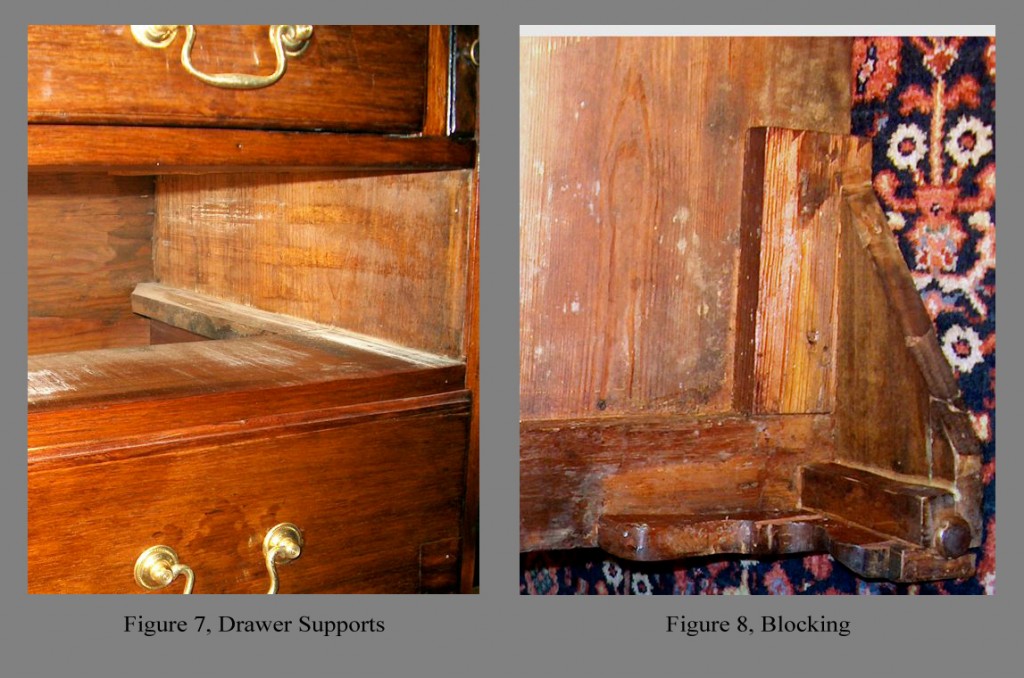 The desk also contains characteristics from the Seay shop as well. The valances over the pigeonholes are simple, stylized versions of the valances Seay used on the monumental WH desk in the Colonial Williamsburg collection, quite unlike the typical cyma-curve valances used by Sharrock. The interior of the prospect of this desk, with its hidden brow drawer, valance with central drop, and two prospect drawers, too, is a simplified version of Seay’s WH desk at Williamsburg. (Fig. 9 & see Figs. 104 & 105 in WH Cabinetmaker…). Finally, ghosts of the original bail pulls and ornate keyhole escutcheons on this desk exactly match the bail pulls and ornate keyhole escutcheons on the WH desk (see Front Cover of WH Cabinetmaker…). Proper bail pulls and keyhole escutcheons now have been installed on this desk (see Fig. 3). Ghosts of drawer-pull backplates visible in Fig. 3 and Fig. 7 are from improper reproductions previously installed. Both desks probably were made about the same time in William Seay’s cabinet shop, which still stand in situ near Roxobel.

The fact that there are numerous characteristics in this desk both from William Seay and the Sharrock family of cabinetmakers comes as no surprise. We previously discussed why these hybrid pieces are encountered in the Roanoke River Basin. So, what makes this particular desk the work of Micajah Wilkes? Wilkes worked independently and in Seay’s shop, and he also interacted closely with the Sharrocks. Consequently, both Seay and the Sharrocks would have influenced him, and Wilkes would have incorporated elements and techniques he liked from both in the construction of this desk. Furthermore, there are two bits of evidence on this desk that make the case for Wilkes having made it and not just piecework in the desk. First, and most obvious, is his MW signature on the fallboard support, as previously mentioned (see Fig.4). Second are Wilkes’ distinctive square and sharply angled dovetails used throughout this desk (Figs. 10 & 11 & see Figs. 376, 384 & 393 in WH Cabinetmaker…). While unwritten, these personal construction characteristics are, nonetheless, recognizable signatures by Wilkes, which he placed in numerous locations in the desk. The combination of his written and all these construction signatures is compelling evidence that Micajah Wilkes made this desk. 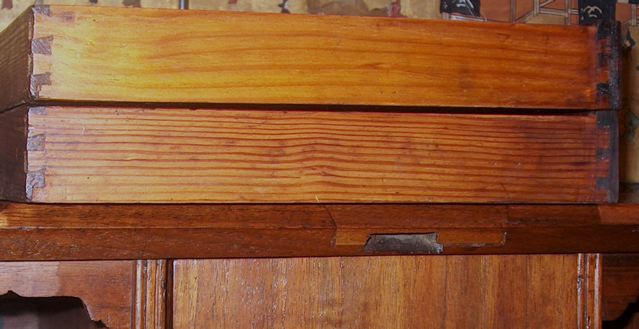 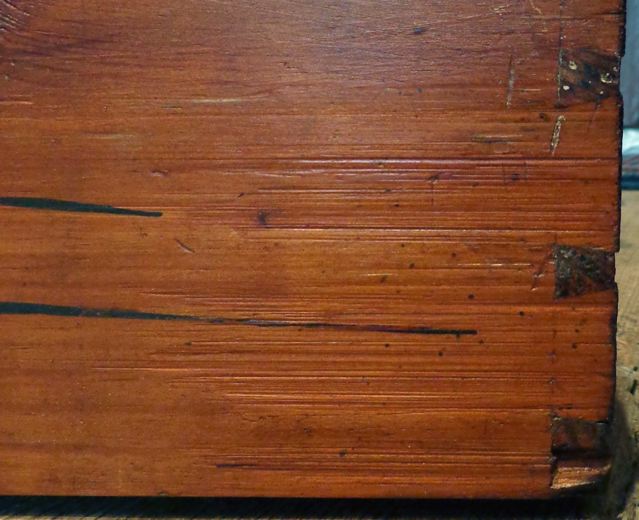 In conclusion, hopefully, this research note will encourage other scholars and collectors to look more carefully for signatures in any form on furniture and architectural elements being examined and to report promptly any finds to assist others in their research. Here, on the Edenton Historical Commission website, research findings can be published promptly for rapid dissemination to others.

For a slideshow of the images used in this article, click on any of the pictures below: 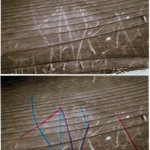 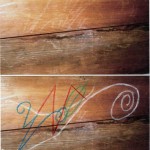 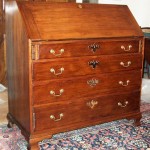 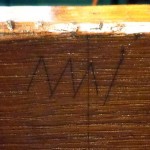 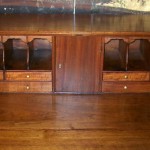 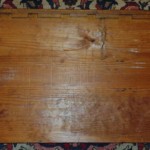 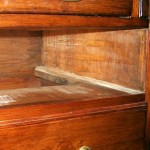 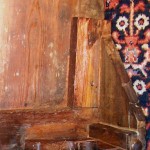 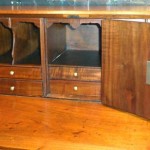 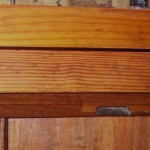 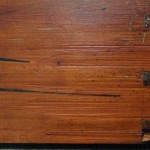