Originally published in The Chesopiean, November 2, 2011

In our book, Classical Norfolk Furniture 1810-1840, we illustrated and discussed a group of common chairs with local histories. Some were documented imports from the Philadelphia area (Fig. 1), while others were produced locally. Based on his advertisements and other records, Joshua Moore was the major common-chair maker in Norfolk from as early as1806 until at least 1835. Since publication of our book in 2004, numerous other common chairs, some signed, with local Norfolk-area histories have been discovered and examined. This has led us to identify important, but subtle, characteristics that allow us to group and date these chairs and, in some cases, identify local trades people who produced or worked on them. In this research note, we will present what we have learned to help others better understand Norfolk common chairs.

Joshua Moore would make just about any design common chair the customer wanted, including derivatives of the Philadelphia style. Variations encountered on Moore chairs include simple to elaborate leg, stretcher and spindle turnings. The variations also include stiles that are fully turned and stiles that are partially turned/partially flat. Additional variations found are flat or slightly arched medial splats, three or four spindles and four, six or seven stretchers. As if cut from the same or similar patterns, seats are generally the same shape and size, though they vary somewhat in thickness. Overall dimensions of the chairs are relatively close. Since “a picture is worth a thousand words”, see Figs. 2-8 for the above-listed variations on Norfolk common chairs. 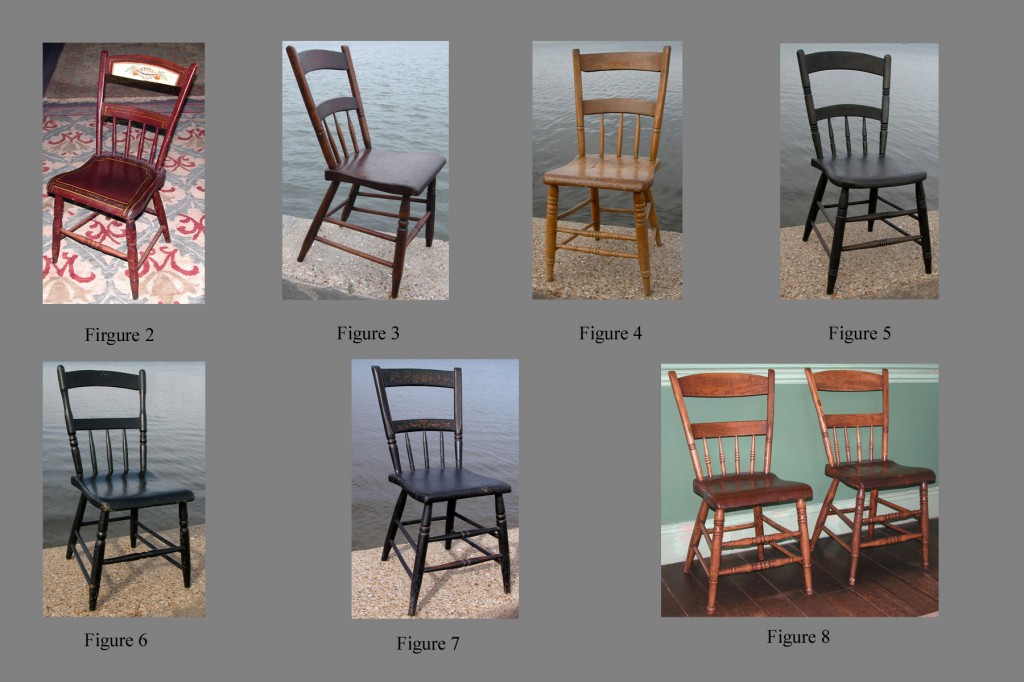 Dating and Interactions With Other Shops

“Conventional wisdom” holds that these common chairs date from the mid to late 1830s. Undoubtedly, some do. However, we have discovered evidence that this form was being produced in Norfolk much earlier. Fig. 2 is one chair in a set of six. The seat bottoms of three of these chairs are inscribed in chalk Solly (SIC) and two are inscribed Drevere (SIC). (Figs. 9 & 10) Chester Sully and Abraham DeRevere are discussed in detail in our book. Inscriptions such as these are consistent with shipping instructions. As such, this set of Joshua Moore chairs was sent first to DeRevere for decoration and then to Sully for sale. Both Sully and DeRevere had separately departed Norfolk by 1821. Consequently, these chairs had to have been produced prior to 1821, likely pushing the date in Norfolk for this chair form back to at least the teens.

Another set of six Joshua Moore chairs, two of which are seen in Fig. 8, are inscribed in pencil on their seat bottoms with an S. (Fig. 11) Again, this likely indicates that this set was made for and was to be sent to Sully. Sully also received and retailed more formal chairs, as evidenced by a pair of circa 1810 mahogany armchairs that descended in the Holland family of Nansemond County, each bearing an S formed in the same manner. 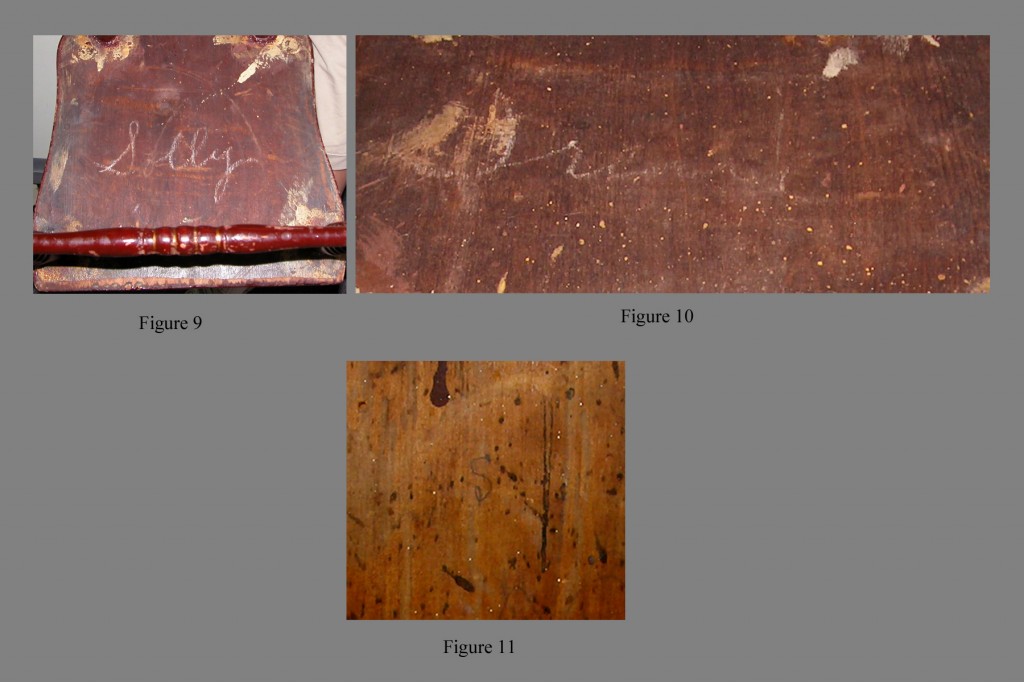 Based on our personal experience in actually making chairs, a chair seat generally is secured to a workbench by placing it in a frame fastened to the bench. This keeps the seat from moving while shaping its top surface. Moore apparently used this method as well as employing another. In his shop, seats were dogged to the workbench by forcing them onto four spikes set into the bench. This method leaves evidence scars in the bottom of the seat. Moore had at least three such workstations. One station had what appears to have been four broken pieces of knife blade embedded in the bench. (Fig. 12) Fig. 7 has such marks, as well as over a dozen other chairs found within the Norfolk area. Another form of bench spikes appears to be four nail points. (Fig. 13) Marks from these are seen on a set of six chairs, of which Fig. 3 is one, as well as on numerous other local-found common chairs. The third type of bench spikes appears to be four screwdriver tips. (Fig. 14) These marks are encountered on a set of six chairs as well as on several other singles found in the Norfolk area. It is not at all uncommon to see evidence where the seat came loose from the spikes during shaping and had to be reset. Such resetting resulted in duplicate spike marks on the seat bottom.

Probably the most pleasant surprise concerning Norfolk common chairs, surfacing since the publication of our book, is a stamped signature, M.C.Co (for Moore Chair Co) (Fig. 15), found on the bottom of Fig. 7 and around a dozen other examples. During this period, initials that represented an individual used in a company title were separated from “Co” by “+”, as in “CS + Co” for Chester Sully and Company. When the initials stood for a company title, as in this case, no “+” separated the initials from “Co”. Apparently, this stamp was not used for very long. So far, it has been found only on chairs with seven stretchers and the knife-blade spike marks. However, not all chairs with seven stretchers and/or knife-blade marks are stamped. 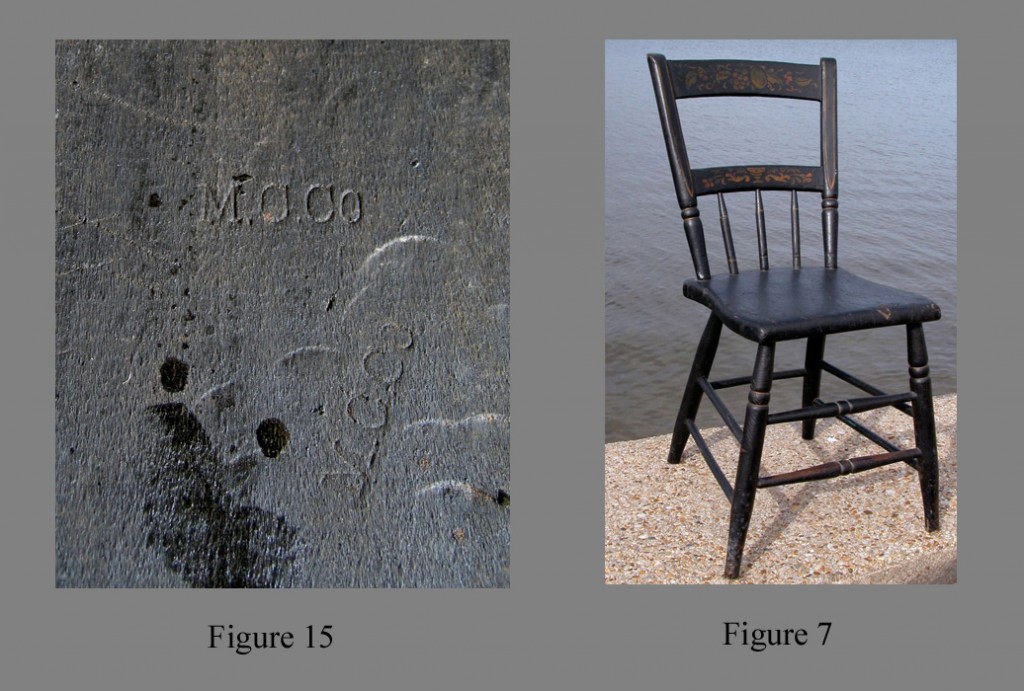 By far, the most frequently encountered Norfolk common chair encompasses the variations seen in Fig. 3. These chairs have six stretchers, three spindles and stiles that are partially turned/partially flat. Simply stated, they are aesthetically pleasing without excessive turnings. 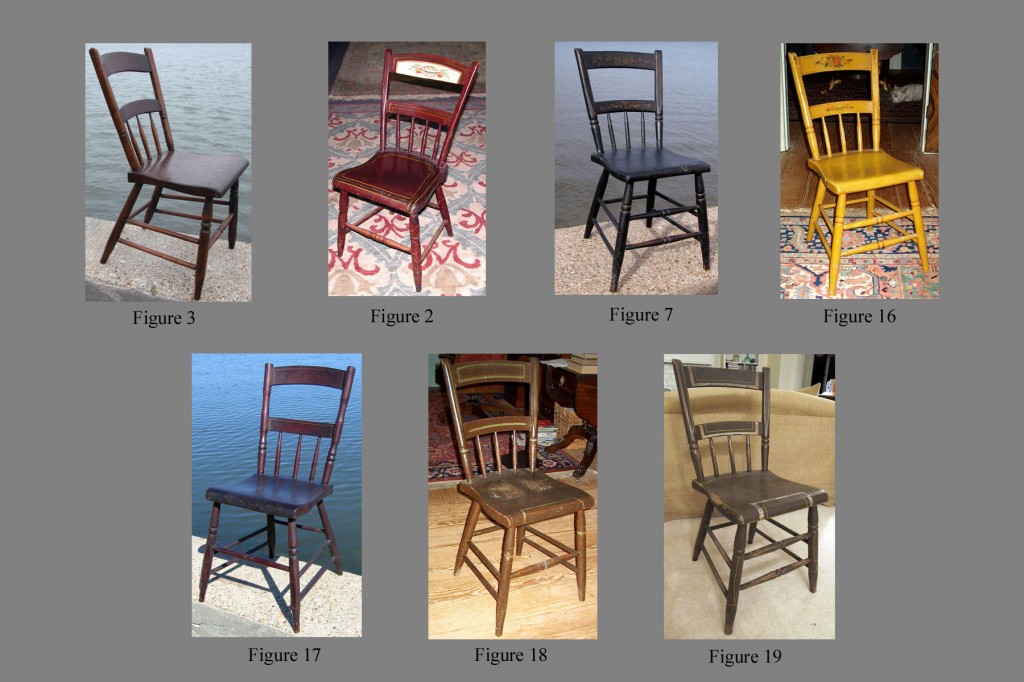 To view a slideshow of all of the photos mentioned in this article, click on one of the following pictures: 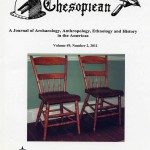 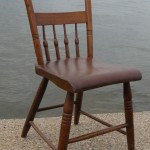 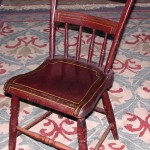 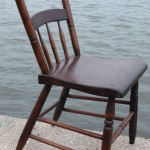 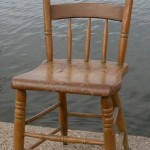 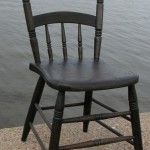 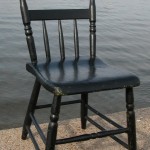 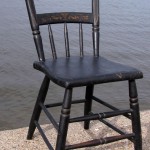 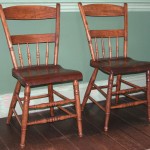 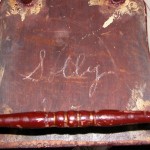 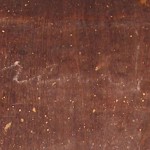 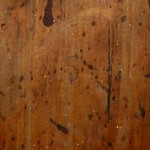 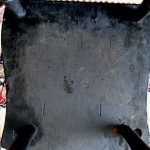 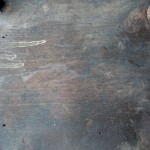 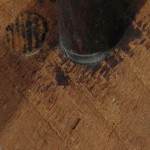 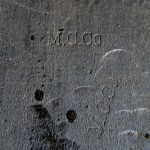 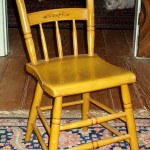 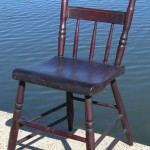 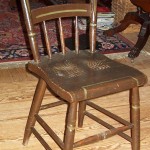 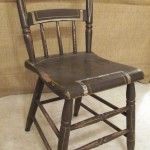