Occasionally during the study of American furniture, a piece re-emerges that provides a whole new body of information about a furniture group. Such is the case with this necessary, pot, or corner chair from the shop of the WH Cabinetmaker, William Seay (Fig. 1). Seay was a full-service house joiner and cabinetmaker. His shop, through his associated journeymen, apprentices, and himself, was capable of supplying all of his clients’ dwelling and furniture needs. If his clients desired seating furniture from him, Seay would tend to their needs; however, this chair is the first recognizable example that can be reasonably attributed to his shop. Consequently, this chair needs to be documented in detail to recognize better other examples of his seating furniture as they emerge. 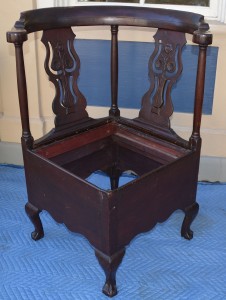 According to noted antiquarian, Bill Beck, of Fredericksburg, VA, a picker bought the chair in Norfolk in 2002 and immediately sold it to him. Beck recognized the chair as NENC, and he retained the chair for only a short period before placing it with a collector of southern furniture. The collector retained the chair in his collection until 2011 before selling it back to Beck. With the repurchase, Beck decided to keep and enjoy the chair in his personal collection for a while before reoffering it for sale.1 Early in 2014, Beck displayed the chair in his booth at an antiques show in northern Virginia. There, Shearer scholar and author, Betsy Davison, a personal friend of Melchor, co-author of WH Cabinetmaker … 2, saw the chair and recognized it as being in the WH group of NENC furniture. She immediately emailed information about and photos of the chair to Melchor, who, in turn, contacted both his co-author and Beck.3 On 31 Jan. 2014, Melchor and Newbern traveled to Fredericksburg, met with Beck, examined and photographed the chair, and verified its origin as being from the shop of William Seay, the WH Cabinetmaker. Several days later, Beck sold the chair to another southern furniture collector.4

Now let us further discuss and view the artwork and construction details of this important chair. The woods in the Seay-shop chair were determined by microanalysis by Chris Swan at Colonial Williamsburg.5 The primary wood is black walnut. The secondary woods are white oak (slip seat), yellow pine and poplar (slip seat & pot supports), and white pine (possibly later corner block). This mix of woods is common in coastal Virginia and North Carolina.

The proportions of the Seay chair are both robust and unusual (Fig. 2 & see Fig. 1). This is particularly noticeable when compared with other southern corner chairs such as these two examples from Virginia (Figs. 3 & 4). The Seay chair is both taller and wider than the other chairs. The crest rail and arms almost enclose the sitter, whereas the other two chairs open up to the sitter (see Fig. 4). If this chair were custom made to fit a particular individual, that person must have been quite large. While the seat elevation is slightly lower than on the other two chairs, the crest rail is distinctly higher, thus emphasizing the overall height of the chair (see Fig. 3). Adding to the unusual proportions of the Seay chair are the deep skirt and short, stubby cabriole legs (see Fig. 3). Note here that the feet have lost about one-half inch in height resulting from wear. All this being said, the chair is still comfortable. 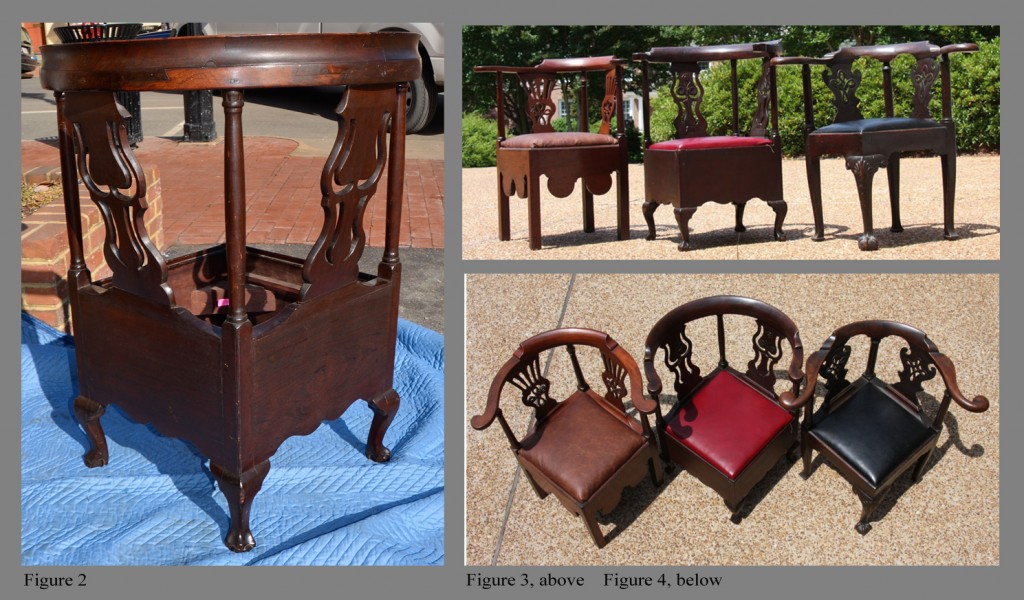 This necessary chair has mixed traits that are expected in Seay-shop work. Besides from his own construction and decoration vocabulary, Seay’s production was significantly influenced by Norfolk work, work from local areas around his home base of Roxobel, NC, and by his associated journeymen.6 The cove molding on the back of the crest rail is unusual (Fig. 5 & see Fig. 2). This same type of cove molding is occasionally seen on Norfolk corner chairs such as the one in Fig. 6. The feet (Figs. 7 – 10) are typical of those produced in Edenton which, in turn, were strongly influenced by Norfolk production.7 The three-piece, rabbeted arms (Fig. 11) are similar to those on some Perquimans County corner chairs where the central section of the arm includes the crest rail (see Figs. 5.106, 5.106a, & 5.107 in Bivins).8 However, the separate, pegged, three-piece, rabbeted, crest rail is Seay’s own (Fig. 12). Note the scratch bead on the crest rail, another typical southern feature (Fig. 13). 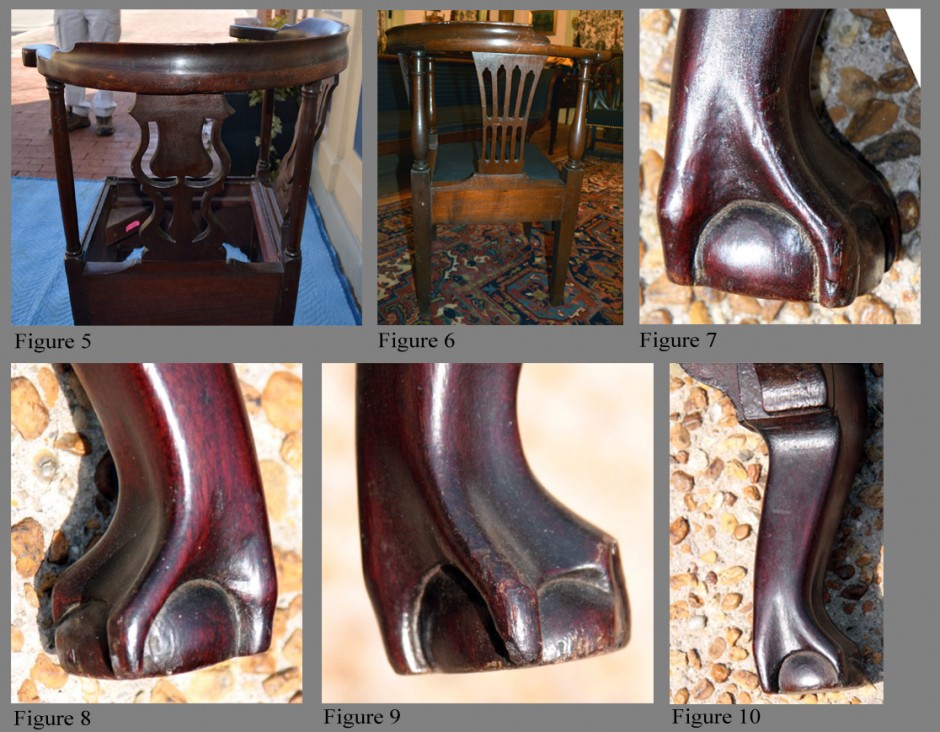 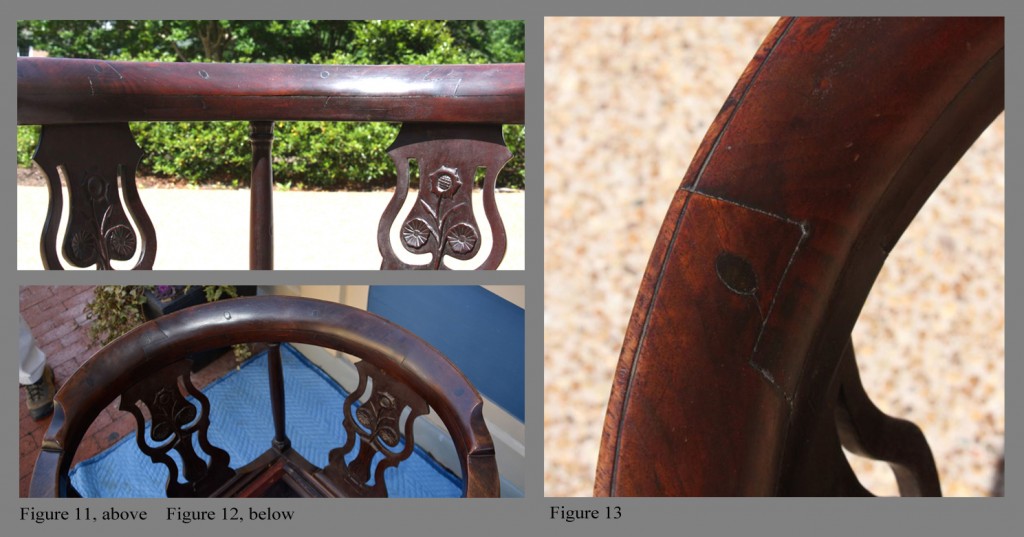 A floral motif, flowers in a vase (Fig. 14 & see Fig. 1), is relief-carved into both splats of this chair. This decoration is pure Bertie County/WH Cabinetmaker shop carving, and it is related directly to similar carving on the doors of the “sunflower” desk and bookcase illustrated in the WH book (see Figs. 292 & 293 in WH Cabinetmaker…). Also, the lyre-shape piercings in the splats come directly from the tympanum inlay below the finial on this same desk and bookcase (see Fig. 294 in WH Cabinetmaker… & see Fig. 14). These related design elements are not coincidences! This necessary chair likely was made for the original owner of the desk and bookcase and probably at the same time. Seay was quirky, and he produced both his own creations and those which his patrons requested. The question arises “why the flowers”? Nobody knows, but there are several speculative possibilities. Seay thought they were interesting (maybe). The patron was a woman who liked flowers (unlikely). The patron’s surname was Flowers, which is not uncommon in NENC (possible). Further along the surname line, two of the flowers on each splat are similar, and one is totally different. Could they represent Flowers’ children, namely two boys and a girl or vice versa? Absent a definitive answer, all logical explanations should be considered. 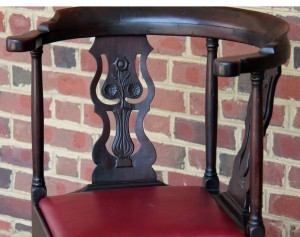 The two similar flowers on each splat resemble closed sunflowers. The petals of these sunflowers allowed Seay to incorporate one of his most often-seen designs, alternating, concave-convex elements. The design of this portion of the carving on the two splats almost exactly matches the design of the relief-carved paterae on the lower doors and the lower lights of the upper doors of the extravagant Hope Plantation corner cupboard, although here more stylized (see Figs. 30 & 31 in WH Cabinetmaker…). He basically repeated the use of these paterae on a press (see Figs. 322 & 323 in WH Cabinetmaker…). The prospect door of a Seay, fall-front desk, bearing his initials on a fall-board support, exhibits a third example of a relief-carved patera almost identical in design to the closed sunflowers on the splats of this chair (see Fig. 300 in WH Cabinetmaker…). To strengthen the direct relationship between this chair and the “sunflower” desk and bookcase, notice that the center of the sunflower on the desk and bookcase (see Fig. 294 in WH Cabinetmaker…) and the two flowers on each splat of the chair (Fig. 15) are essentially the same. All have alternating, concave-convex petals, eight of each in each flower. Again, this is no coincidence! 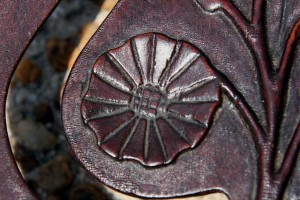 Seay incorporated this concave-convex design feature in much of his work, including the profile of the articulated arches on the doors of many of his presses and corner cupboards (see Figs. 2, 5, 33, 84, 85, 115, 315, 322, 330, 333, 341, & 346 in WH Cabinetmaker…). The alternating concave-convex profile is also found on stair brackets in Woodville, built by Seay for John P. Hill (see Fig. 44 & discussion on p. 41 in WH Cabinetmaker…). Seay, too, used these elements in creating the front façade profile of a magnificent block-front desk (see Fig. 72 in WH Cabinetmaker…). All told, the concave-convex design elements used in creating the closed sunflowers on the chair splats were probably Seay’s favorite of all his design elements, and they should be considered one of his design/construction signatures.

Yet another distinctive design element of the WH Cabinetmaker on the chair is the chip-carved flutes at the tops of the columns (Fig. 16 & see Fig. 14). This work relates closely to that on the columns of other Seay pieces (see Figs. 102, 299, 312, & 314 in WH Cabinetmaker…). 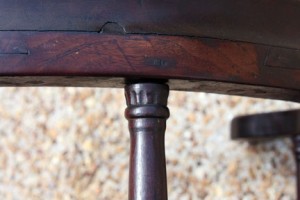 The following construction details are offered to complete the documentation of this necessary chair. Figs. 17 & 18 show the slip seat and pot support rails. Note in Fig. 18 the bevel on the underside of the rail. This is sometimes seen in New Bern furniture and elsewhere.9 Joinery details of the deep skirt are seen in Fig. 19 along with the decorative bead struck on the front edge of all four outside corners of the chair. On the underside of the arm, there is the signature, W. Savery, (Fig. 20). This is a secondary signature in a somewhat later handwriting style, certainly not that of the famous Philadelphia chair maker of the same name. Savery was a common Quaker name, and numerous Quakers inhabited NENC and southeastern Virginia. This is probably the signature of a subsequent, mid-nineteenth century owner. 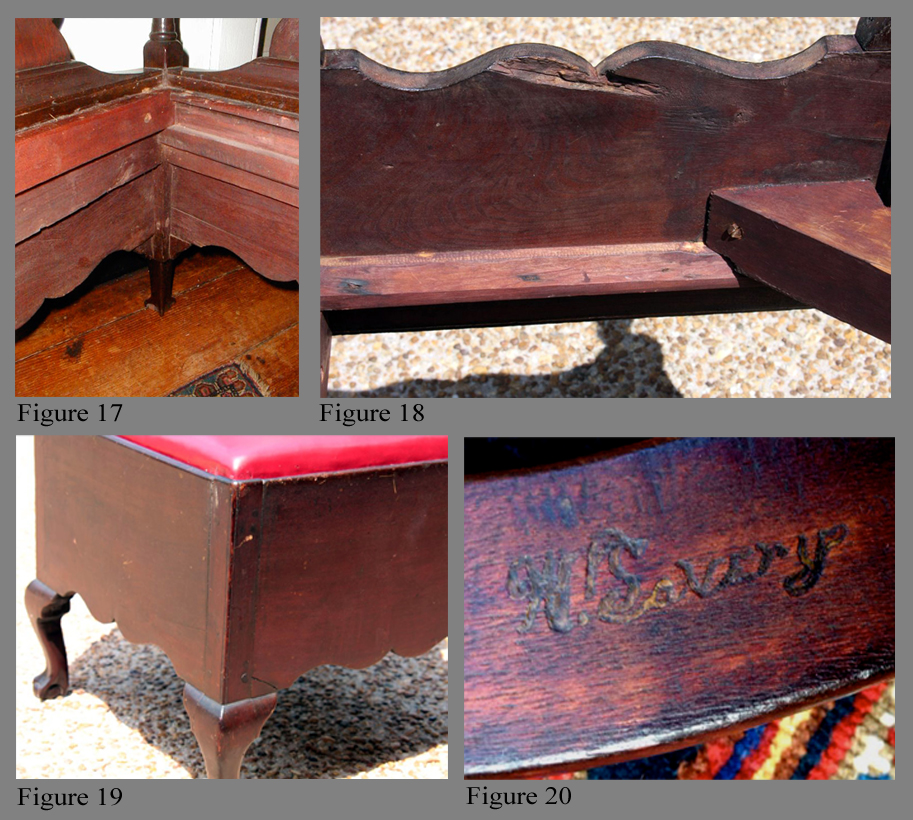 The final construction detail of the chair to discuss is the unusual seating of each of the two splats in their respective shoes. This detail is in the form of a wedge inserted between the splat bottom and the shoe (Figs. 21 & 22). These wedges appear to be original construction. However, it is possible, but not likely, they could be later repairs to tighten the splats in their shoes due to shrinkage of the shoes or corrections of errors in original cuts of the shoes and/or splats. If an intended construction feature as suspected, could this wedge detail be a previously undiscovered Seay design/construction signature?

Prominent artisans of the period usually left a legacy, or a sphere of influence, created by their apprentices and journeymen as they ventured forth, maintaining at least some of the skills and training taught to them by their masters. However, Seay’s furniture did not create a sphere of influence. Seay was a trained house joiner who was exposed to cabinetry, and his furniture was the result. His houses certainly did create a sphere of influence as his workmen went out on their own.10 An example is the Jesse Powell house northwest of Scotland Neck. Cabinetmakers such as the Sharrocks, Thomas White, and William Jones, however, all had spheres of influence. They were mainstream cabinetmakers whose trained workmen carried on their traditions. Seay is more like Shearer. His quirky furniture represented a moment in time in a remote locale. If Seay had a furniture sphere of influence and there were a chair from this sphere, it would look like a Roanoke River Basin (RRB) chair with Seay decorative elements like the flowers. No doubt someone was making chairs in Bertie County and probably in Roxobel, but that would have been a trained chair guy, perhaps one of the Sharrocks. We do not know yet. The point is this chair structurally is not by a trained RRB chair maker. That fact removes a lot of potential makers and places it in a very small and rare category. So looking at who is left, with the woods, structure, recovery history, and known Seay features of gouge cuts and concave-convex elements, there is no where else to go logically but to the Seay shop. Seay, like Shearer, was his own sphere, and it died with him. He took a personal lead with the furniture in his shop with help of journeymen. This chair likely was Seay’s instruction to a journeyman to execute. It would have been way too tedious and time consuming for Seay himself, except probably the carving. He had houses to build and money to make. 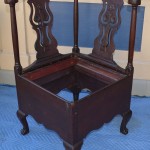 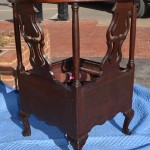 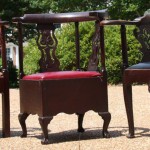 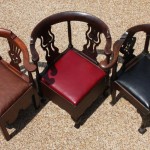 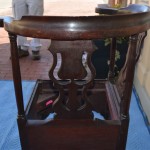 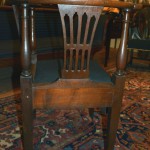 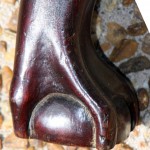 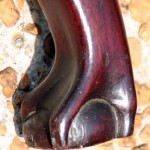 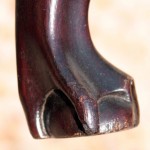 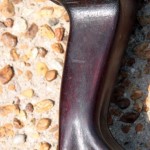 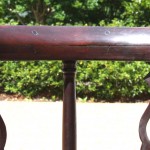 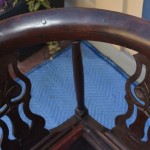 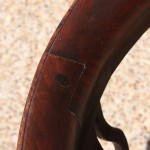 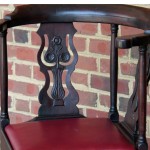 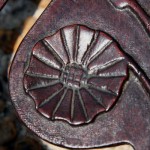 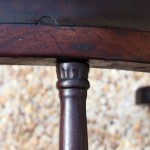 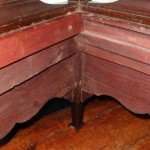 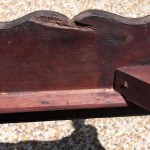 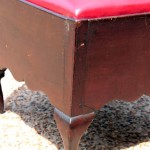 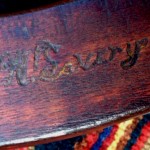 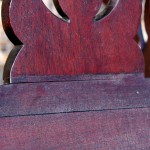 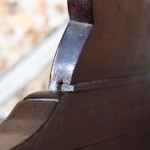