………. “it was bought by Dr. Samuel Dickinson, my great grandfather.  It has been in the same family 139 years.  There was a veranda around the octagon shaped cupola where Mrs. Samuel Dickinson, also her daughter, Mrs. Nathaniel Bond, used to entertain at five o’clock teas their many friends.”

The Old Cupola House of Edenton, NC: A Concise History

Was there really a veranda (platform) that wrapped around the cupola or was this a fictional tale told by Miss Bond about this revered Edenton home?  The architecturally curious 1758 Cupola House has long enthralled the interest of scholars, citizens, and visitors to Edenton (Fig. 1).  Curiosity about this house has resulted in numerous architectural and historical studies along with written reports, articles, and publications. Famed New England architectural historian Abbott Lowell Cummings, who paid a visit to the Cupola House in 1990, observed “that the Cupola House, with all its intriguing questions pertaining to the influence on its architecture, remains an American masterpiece… and will remain an unfailing source of study for years to come.” [1]  A superb history and the story of the preservation effort were compiled and written about in 1995 by Mary Ann Coffey and Murphy Moss in their book, Deliverance of a Treasure:  The Cupola House Association and its Mission. [2] 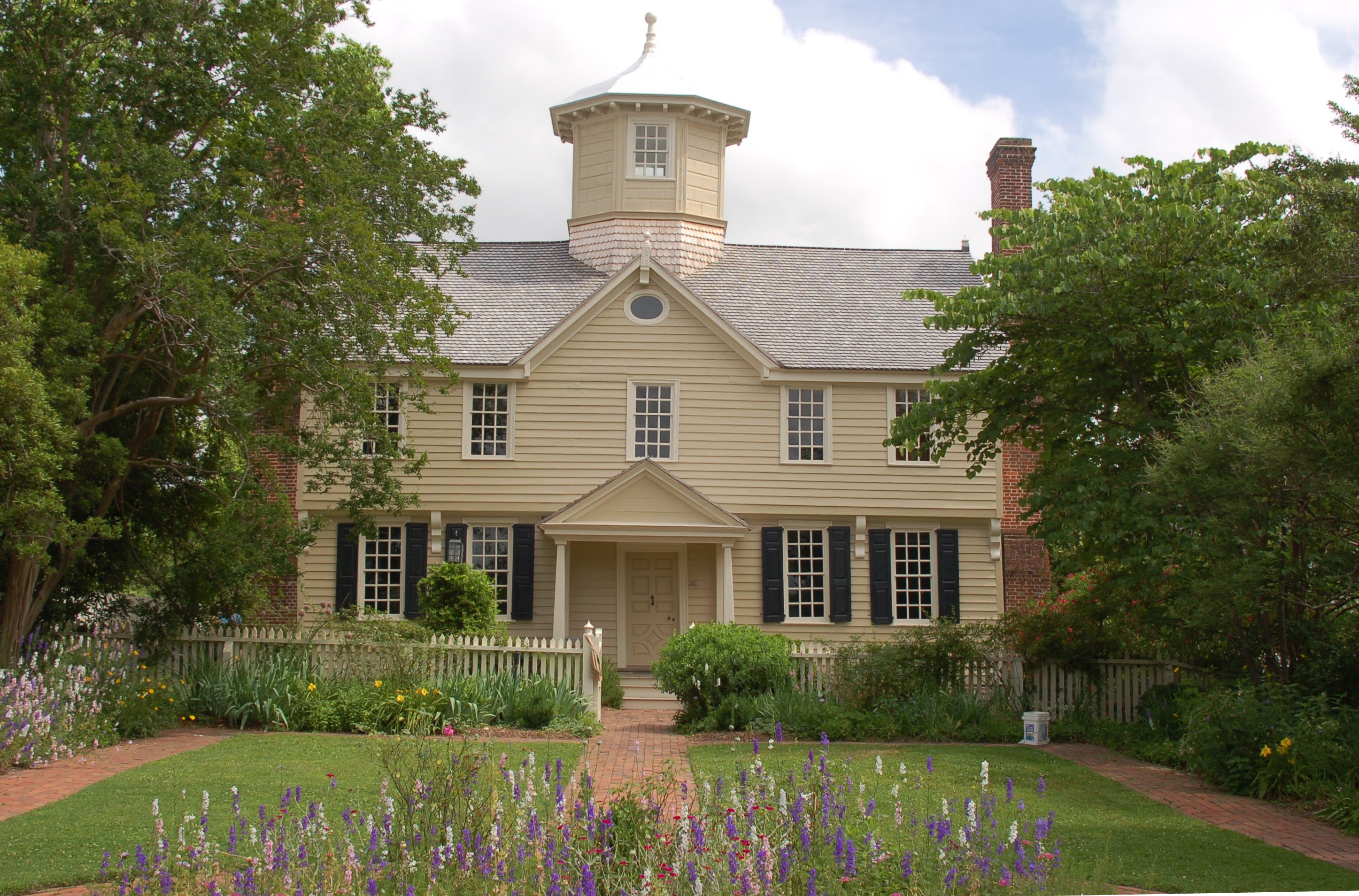 The Cupola House Association has been an excellent steward of this National Historic Landmark for over 90 years.  The recently completed two-year conservation and repair project, spearheaded by members of the Association, was successful along with their extraordinary effort in securing donations and grant funds, including a Save America’s Treasures grant from the National Park Service. [3] Cupola House board members were also determined to achieve “museum-quality” work standards as well as select appropriate and high-quality materials for the project.

One of the major components of this project was replacement of the wood shingle roof.  Peter Post of Richmond, Virginia, consulted on reroofing the house (Fig. 2).  Mr. Post was recently involved with roofing work at James Madison’s Montpelier, George Mason’s Gunston Hall, and Mount Vernon. 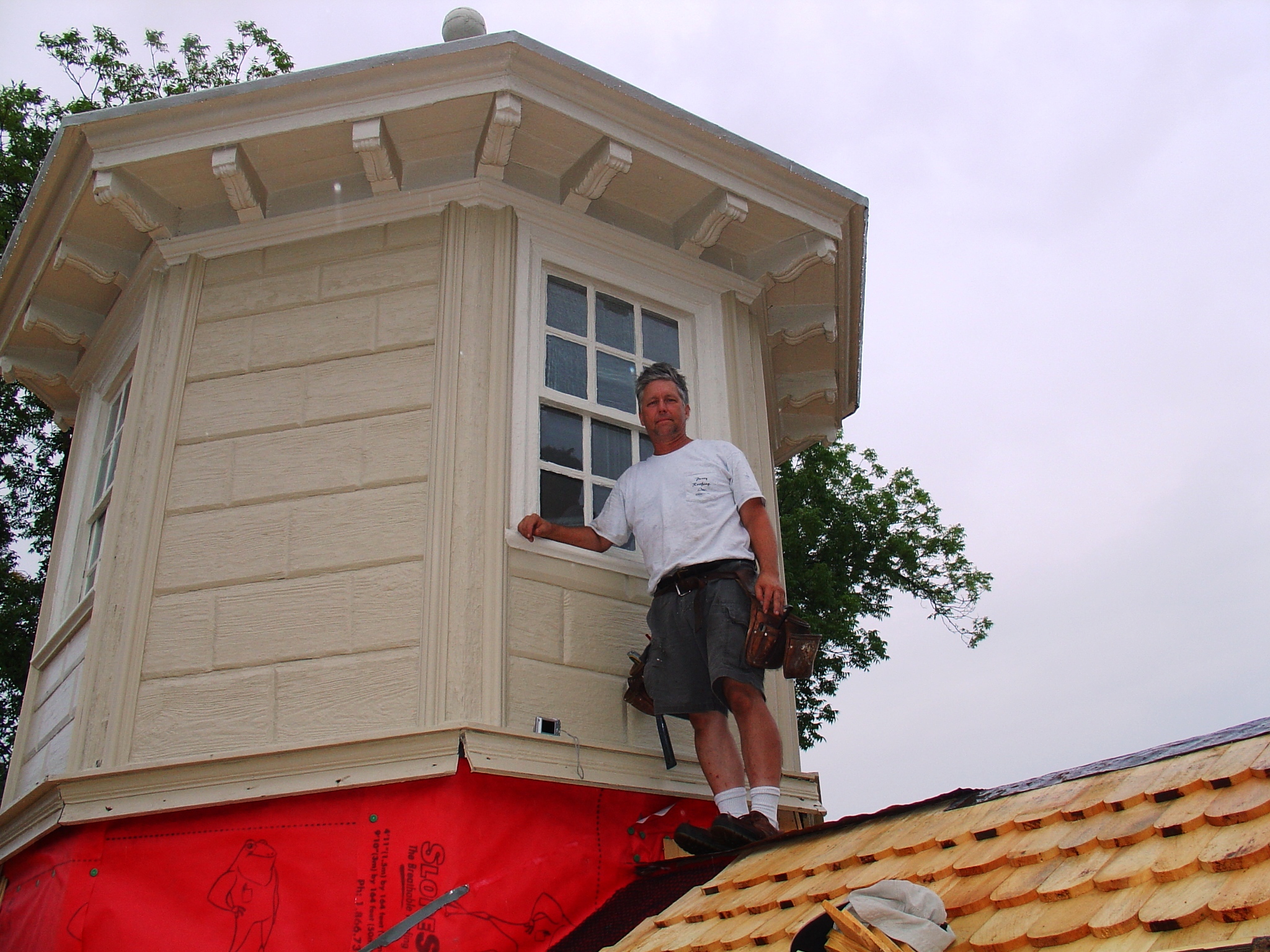 While removing the old shingles two important discoveries were made.  Peter Post and Don Jordan, Cupola House Association board member, volunteer, and master cabinetmaker, uncovered evidence that suggests that the house was originally clad with “rusticated” siding (Fig. 3).  The cupola still retains rusticated siding (Fig. 4).  Rustication was a fashionable eighteenth-century treatment where wooden siding boards were cut to simulate stone.  Sand was often applied to the freshly painted surface of the siding for a more realistic stone appearance.  Rusticated siding on historic New England buildings was sometimes installed on all four sides, just the front elevation, or the front and sides and not the rear. [4]  Perhaps one of the most recognized historic homes in America with rusticated siding is Mount Vernon. 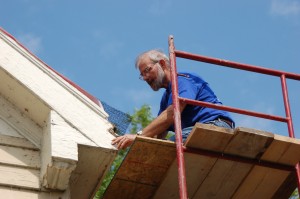 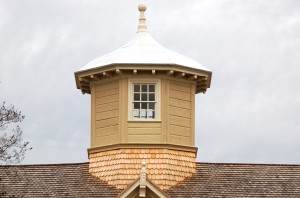 Staff with Colonial Williamsburg’s Architectural Research Department and members of the Restoration Branch of the State Historic Preservation Office under the direction of A.L. Honeycutt, Jr. conducted architectural investigations of the unique framing system in 1991 and 1992.  The team discovered that the existing lap and beaded siding on the first and second floors was installed with machine-made cut nails.[5]  Combined with evidence for earlier siding nail holes that were uncovered during this study, it appears that the house, with exception of the cupola, was re-sided during the first quarter of the nineteenth-century.  The re-siding possibly occurred during the 1819 renovations when the owner, Nathaniel Bond, added the northwest chimney and front porch (Fig. 5). [6] 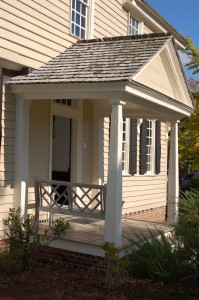 During the recent re-roofing of the early nineteenth-century front porch, several pieces of weathered yellow-pine “rusticated” siding were discovered in the framing system.  These boards were re-used as nailers for attachment of the porch ceiling plaster lath (Figs. 6 & 7).  While these boards were consistent with the rusticated siding that survives on the Cupola, most of these pieces are too long to have been used in that location (Fig. 8).  Several of these re-used boards measure more than five feet in length and retained deteriorated paint evidence.[7]  This combined evidence suggests that a portion or perhaps all sides of the Cupola House was originally clad with rusticated siding.  Why did the house get re-sided approximately sixty years after construction?  Was the siding replaced because it was out-of-fashion?  While the remnants in the porch ceiling show significant weathering, the durable resin-rich yellow-pine boards likely would have weathered many more generations. 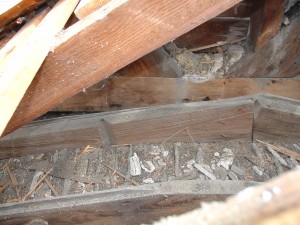 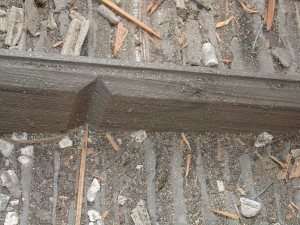 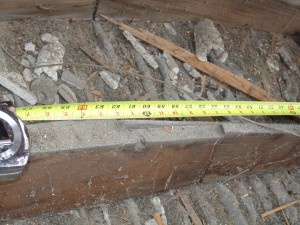 Perhaps Tillie Bond was giving a factual account about the “veranda around the octagon shaped cupola” The second exciting discovery was made by Peter Post during the re-roofing work.  Mr. Post raised questions about the shingle treatment that went up the vertical walls at the base of the octagonal cupola.  He felt that this treatment was unusual for the period in which the house was built.  As Mr. Post removed the twenty-year-old shingles at the base of the cupola, he uncovered tightly fitting sheeting boards with weathered paint evidence suggested that the shingle treatment was later.[8] These simple sheathing boards, attached with handwrought nails, were installed horizontally on the north and south elevations and parallel to the roof on the east and west sides (Fig. 9).  Mr. Post was then puzzled by crudely chopped-off joist ends on each side of the cupola. These cut-off framing members are located at the same level as the cupola floor and the sheathing boards were carefully notched to fit around these beams (Figs. 10 & 11).  Was Mr. Post’s discovery evidence for a platform that wrapped around the cupola?  Supporting evidence was noticed by Don Jordan who pointed out corresponding cut marks on the original chair rail, baseboard and crown molding inside the cupola on the southeast elevation looking towards the Barker House.[9] These ghost marks appear to suggest the location of an opening that was later closed in and patched with woodwork and plaster that closely matched the surrounding fabric.  Was this the location of a door that accessed a platform that wrapped around the octagonal cupola?  Mack Chappell who authored The Cupola House and Its Associations included the following: 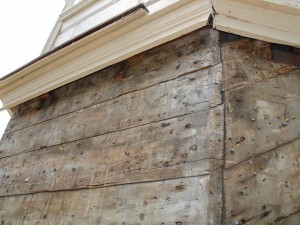 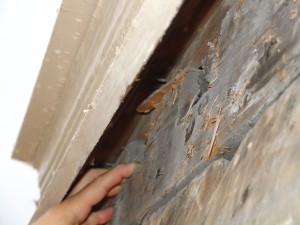 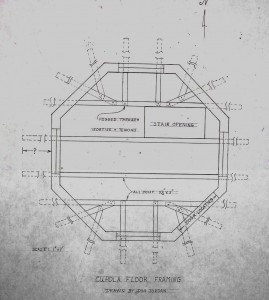 For safety and aesthetic reasons a balustrade presumably would have wrapped around such a platform. With the detailed carvings and moldings on the exterior of the Cupola House it seems reasonable to suggest that a platform would have also been nicely finished.  Turned balusters similar or identical to the surviving ones in the interior staircase, ascending to all three floors, might have been used in a cupola balustrade (Fig. 12). 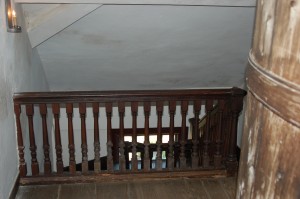 Tucked away inside the third floor northeast attic space are ten flat wrought-iron bars measuring approximately three feet in length.  Ends on some of these bars are angled with holes punched through on each end (Figs. 13 & 14).  A few handwrought nails with leather washers survive in a small number of the bars.  There are traces of old paint on the bars. [11]  These blacksmith-made bars have been a mystery for quite some time.  Buried beneath salvaged timbers, architectural components and other family objects in the attic, the bars appear to have been undisturbed for generations.  A few were removed and examined during the 1991 architectural investigation though remained a mystery.  Could these bars be associated with a platform?  If so, what was their use?  Did they provide support for a balustrade and/or for the platform base around the cupola? If these were used to support the platform can they provide clues to the depth of this feature?

Cupolas were occasionally installed on public buildings as well as private homes in the eighteenth-century.  Dr. Carl R. Lounsbury in his book, An Illustrated Glossary of Early Southern Architecture and Landscape, elegantly wrote “The drums of the cupolas on important dwellings such as the Cupola House in Edenton, North Carolina (1758) were often glazed and provided a place to observe the topography of the surrounding area, a place of entertainment, and ventilation shafts for cool breezes.” [12]

Mack. Chappell wrote in The Cupola House and Its Associations: “There is in the cupola a spy-glass with the body, made of mahogany and brass ends.  The glass is forty-eight inches long, two inches thick, and is octagon-shaped.” [13]

In Virginia, the Governor’s Palace at Williamsburg, Rosewell Plantation in Gloucester County, and George Washington’s Mount Vernon all had cupolas. [14] The eighteenth-century Bodleian Plate depicting public buildings in Williamsburg, Virginia, contains a sketch of the first capitol building illustrating a platform that wraps around the hexagonal cupola.[15]  The platform in the drawing shows turned balusters in the cupola balustrade.  This feature was incorporated into the 1930s capitol reconstruction along with rusticated siding.

These rooftop structures were also popular in New England states as well as England.  In the fascinating 1989 article, The Cupola House: An Anachronism of Style and Technology, the authors note the following:

“For example, in 1728 Godfrey Malbone built a large two-and-one half-story gambrel on Thames Street in Newport, Rhode Island.  A prominent cupola and what appears to be a balustraded gallery on this house appears in a 1740 sketch of the city. These features

parallel the 1739 Colony House in Newport, an important Baroque building attributed to Richard Munday. In England, a 1693 three- story house with jettied upper stories in Bury St. Edmunds, Suffolk, has a stylish cupola set at the juncture of the main block of the house and a rear ell”.[16]

If indeed a platform surrounded the cupola as evidence strongly suggests, what influenced the builder or Francis Corbin to add this unique feature?  Did Corbin loosely model the cupola from a building that he was familiar with in England, the Colonies or architectural pattern books?  While answers to these questions may remain a mystery, perhaps when the current roof needs replacement in the future (hopefully, well in the future) further investigations can be carried out to search for additional clues about the Cupola House platform.

With the completion of this recent project, the Cupola House Association has once again demonstrated their outstanding commitment and stewardship for this most important National Historic Landmark.  The members of the Cupola House Association, their consultants and craftspeople, and their many supporters should all take pride in their success and recent discoveries about this famed house. 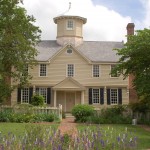 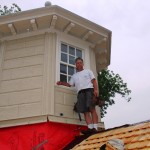 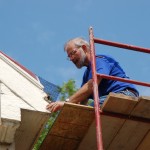 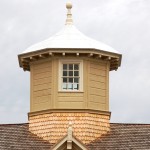 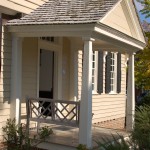 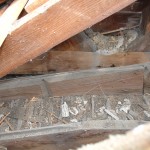 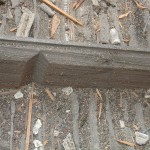 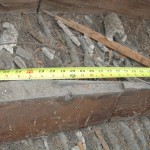 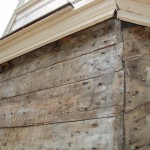 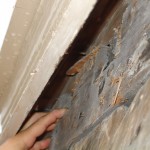 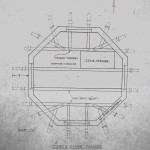 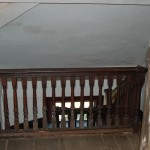 [6] Mary Ann Coffey and Murphy Moss, Deliverance of a Treasure: The Cupola House Association and its Mission, 3-4.

[16] John Bivins, James Melchor, Marilyn Melchor, and Richard Parsons, “The Cupola House: An Anachronism of Style and Technology,” Journal of Early Southern Decorative Arts 15, no. 1 (May 1989): 67. 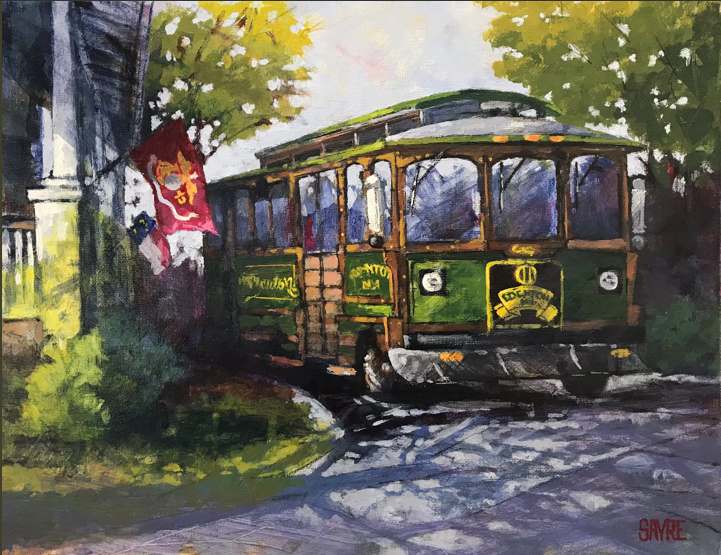 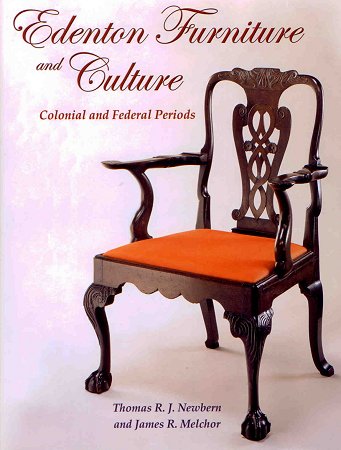 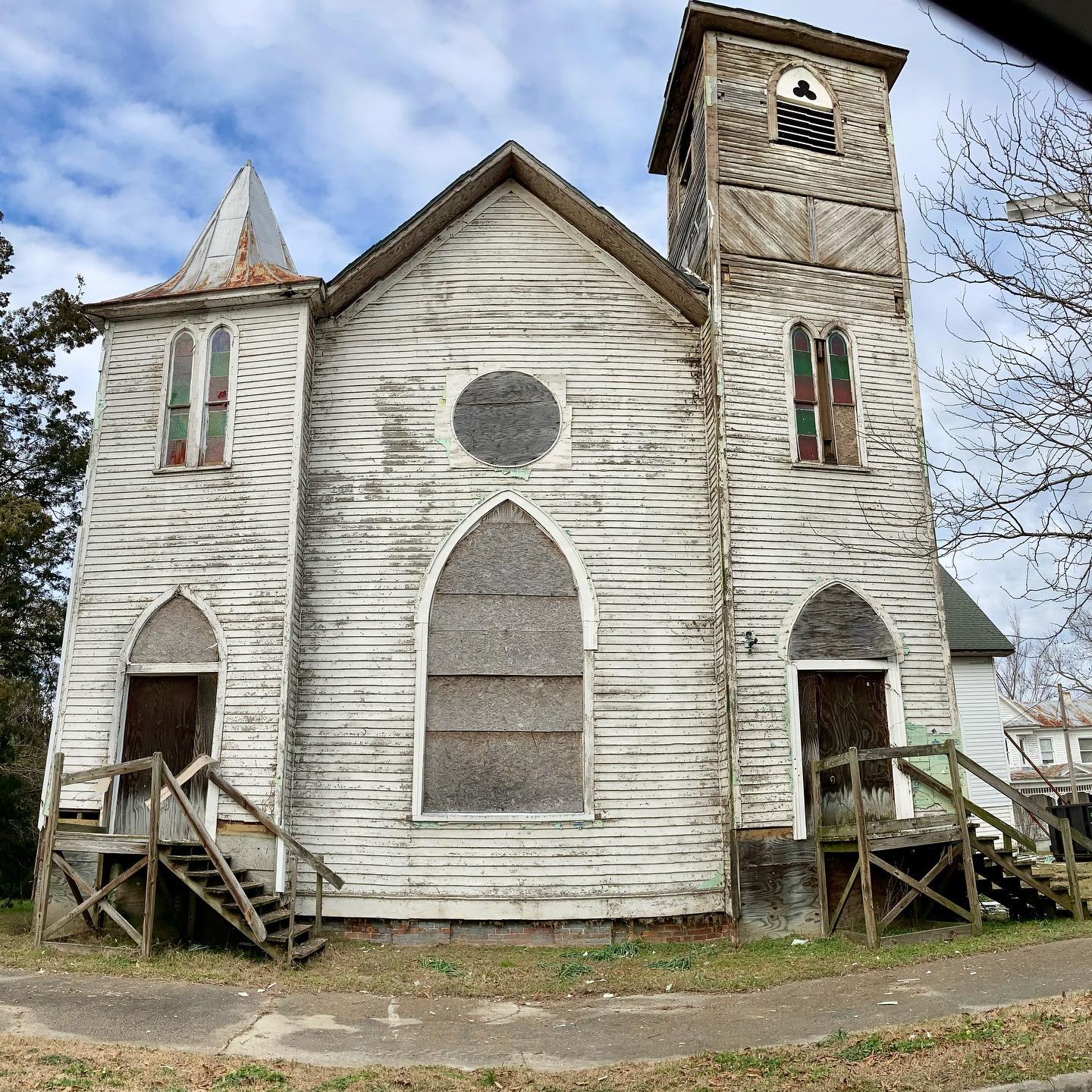