There are several situations in which the value of historic buildings must be stated in monetary terms rather than simply “irreplaceable.” The most important is for the economic justification of protective devices, ranging from fire suppression systems to flood walls. While government at all levels uses the economically-justified criteria more than private or non-profit organizations, the premise that the benefits derived from protecting a structure equal or exceed the cost of the protection, is a valid and financially sound concern. Another situation in which a realistic monetary value needs to be placed on historic structures is for adequate/comprehensive insurance coverage. Historic structures have an intrinsic value that exceeds (often substantially) the simple modern replacement value.  Unfortunately in most cases, simple replacement cost is the most frequently used method for determining the value of a historic structure.  Obviously this methodology is less than desirable and does an injustice to a resource.

In an attempt to evaluate more realistically the real worth of historic buildings and possibly to standardize the means of doing so on a nation-wide basis, I have devised the following methodology. While this methodology is usable in its present form, yielding reasonable results, it is, nevertheless, an a posteriori approach derived to address an immediate need. Perhaps this attempt will make resource managers and decision makers more aware of the value of historic structures and will be the foundation upon which to build an even better method for evaluating these structures.

Determining the value of historic structures, where ages range from the seventeenth to the twenty-first centuries, can be a difficult process. Because so many variables are involved, an evaluation of a particular building by different people can result in widely varying values.

To aid in the necessary process of applying a replacement value to a historic structure, I have developed a set of criteria based on ten factors. Each factor has a point spread assigned to it; the point system is weighted, with the more important factors having the possibility of more points. The maximum attainable total of points is 500, which would equal a multiplication factor of 100 times. The progression scale is not linear, but logarithmic. While this was empirically decided, it does produce reasonable values. A building that rates 300 points is worth many times more than twice the value of a 150-point building. 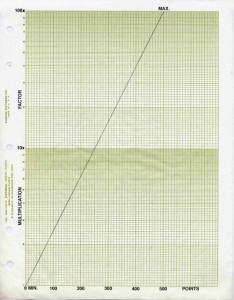 After determining the maximum number of points for a building, go to the plotted curve on semi-log paper (Fig. 1); enter points and pick the multiplication factor off of the log scale. Multiply this factor times the replacement value of a similar modern building (not a replica) in the same location. The result would be the estimated replacement value of the historic structure.

The ten factors for determining the value of a historic building are:

(2) Rarity – 0 to 100 Points: The only surviving example of a particular style, such as the Jacobean Bacon’s Castle in Surry County, Virginia or the newly discovered earliest house in North Carolina, the Lane House in Edenton, would warrant many more points than an example, however fine, of a Georgian brick residence, of which numerous still stand.

(3) Archaeological Context – 0 to 30 Points: A structure on its original site usually has the potential of having additional information recovered through site survey and archaeological excavations. Such a building would warrant the full 30 points, as an original location complements a structure. If the site has been altered in such a manner as to preclude archaeology in the near or even distant future, for example a historic building surrounded by modern encroachments, a lesser value would be applied, according to the individual situation. A building that has been moved out of its archaeological context would receive 0 points because some of its history has been lost. However, if the original site is still available for archaeological research, such as is the case with the cabinet shop of William Seay, recently moved from near Roxobel, NC to Edenton, some points should be applied.

(4) Architectural Detail, Decoration, and Usage – 0 to 100 Points: A structure, whether residential, commercial/industrial, or public, with a wealth of details, including, but not limited to, cornices, over-door pediments, paneling, carved trim, staircases, decorative brickwork, and evidence of original use would receive a higher number of points than an originally unadorned building or one that has been stripped of its assets.

(5) Historic/Period Documentation – 0 to 30 Points: Some, but not all, examples of documentation would be journals, diaries, travelers accounts, and public records, such as newspapers, insurance policies, deed books, tax rolls, vestry minutes and building permits. Period photographs and sketches should be included. Naturally, period documentation contemporary with the building would weigh more heavily than cursory mention in a later record.

(6) Condition of the Physical Plant – 0 to 80 Points: Has the structure been preserved, sympathetically restored, radically altered, or left to deteriorate? A quality restoration can enhance the value of a building. Conversely, a drastic alteration, even with quality workmanship and materials, diminishes the value. The evaluator needs to consider the degree of alteration when assigning points. An intact building in poor condition conceivably can be of more value than a sound structure that has little or no resemblance to the original.

20 points, and local adds 10 points. If the building has no public interest at all, a zero would be appropriate.

(8) Cultural/Historical Associations – 0 to 20 Points: If a building had an association with a well-known or historical figure or if a significant or important event took place in the building, the evaluator should add 0 to 20 points, depending on the degree of the event and/or the fame of the figure.

(9) Public Accessibility – 0 to 10 Points: Lack of accessibility does not take away overall value of a building, but public access does add to the worth of a historical structure. A building that cannot be entered by the public at any time would rate a zero. Intermittent access, such as during Garden Week in Virginia or special tours by appointment, would add 5 points. A structure open to the public most or all of the time should be given 10 points.

(10) Unusual Features – 0 to 50 Points: This category includes any feature not expected either to have survived or to be in or with the structure initially. Exquisite paneling in a modest structure would be one example. Another example would be the incorporation of innovations, such as indoor plumbing at Thomas Jefferson’s Monticello. Obviously, the evaluator needs to develop a sharp eye to determine aspects of a building that are exceptional or unexpected.

The weighted point system, based on these ten factors, would naturally be subject to individual interpretations. The merit of this system is in the fact that determination of value would be somewhat standardized. Each historic structure would be judged by the same criteria and assigned a point value that could be converted to modern replacement worth by simple mathematics. This guide or evaluation system can be applied nationwide to all types and ages of historic buildings.

Bacon’s Castle (Allen family home), c. 1665, Surry County, Virginia, only surviving example of Jacobean architecture in America, impressive brick structure owned and restored by The Association for the Preservation of Virginia Antiquities (now Preservation Virginia); open to the public at intermittent times and by request.

(2) 100/100 Only surviving example of Jacobean architecture in America.

(6) 50/80 Altered through time by subsequent owners; has had sympathetic restoration.

(6) 50/80 Structure has been stabilized and moved to preserve it; preservation work continues; shed section on back has been lost.

(8) 10/20 Seay was the most prominent house wright and cabinetmaker in the lower Roanoke River Basin in and around Bertie County, NC. in the late eighteenth and early nineteenth centuries, serving local wealthy notables such as Whitmell Hill and Governor David Stone.

(10) 30/50 Beam three feet up in loft for holding log walls in place and for lifting cabinet lumber through open joists for storage in loft.

(6) 60/80 Building intact; sympathetic restoration; good maintenance; questions remain concerning a pent or buttery on the east side of the house.

(2) 60/100 General style of building not uncommon even though original fort use was.

(4) 80/100 Some exterior, decorative, architectural brickwork, such as the parapet, some interior wood sheathing on walls; archaeological evidence of defensive earthen hornwork.

(7) 30/40 State importance in its association with other coastal fort structures.